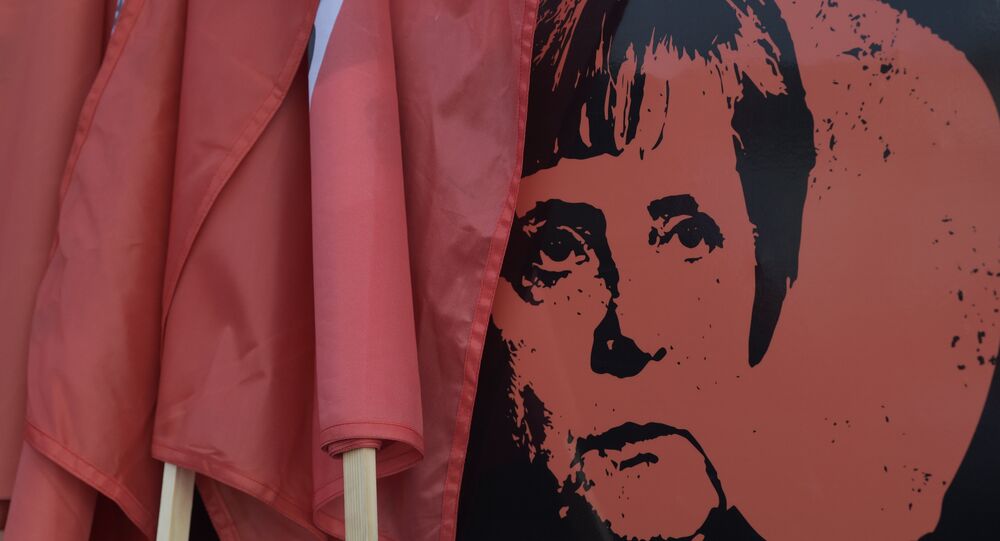 The killing of 14-year-old Susanna from Mainz shocked Germany this June. The 21-year-old suspected murderer and rapist, who came to Europe to seek asylum, fled to Iraq with his family, but was returned and is awaiting trial. The victim’s mother has opened up about her fight for his punishment and against Angela Merkel’s refugee policy.

Diana Feldmann, who lost her daughter in a brutal murder, confessed to by 21-year-old Ali Bashar from Iraq, revealed to The Jerusalem Post that the murderer received a “fan page” on Instagram as some celebrated her daughter’s murder. Although she refuted the speculations that the killing had anti-Semitic motives, she said that some people had praised the Iraqi for killing a Jewish “slut” on this “hater” account, now deleted, and posted collages with Susanna and a burning Israeli flag.

According to the grieving mother, she was aware of her daughter’s close relations to the confessed murderer’s family as Susanna had “fallen in love” with his 14-year-old brother KC. Susanna also told her that they stole, dealt drugs, but insisted they never did anything to her. However, she fights off accusations of bad parenting and says that she warned her daughter about the dangers because the girl couldn’t know where they’re from, what they’ve been through, how these people tick, and “what goes on in their minds”.

Diana Feldmann stated that her daughter’s sweetheart KC lured her for his brother and his suspected accomplices, including a 35-year-old Turk. According to her conclusion, the rape was planned, although she is unsure if the killing was also on the perpetrator’s mind before.

“The Afghan [a witness named Mansur] said Ali always told him: ‘When you see [Susanna], you have to call me every time. One day I’ll f*** her’”, the woman revealed.

The mother also stated that one of Susanna’s female friends, named Sonja, got an SOS message from her daughter on the tragic day, but the girl told her to call her mother instead and didn’t inform anybody about it.

“And this Sonja was the first and only one who knew Susanna was in trouble, because [Susanna] wrote to her in the evening: ‘Help me. I’m afraid. I’m here with Ali and his friends in a refugee home. I want to go and they won’t let me. They’re keeping me here.’ This Sonja just left her to her fate. She didn’t tell me and didn’t call the police. I think out of jealousy”, she said.

Besides, the perpetrator allegedly got hold of the phone and texted Feldmann when her daughter was already dead, saying she’s leaving for Paris. At the same time, she says Ali’s mother lied to her about being in the dark about her daughter’s fate before trying to escape abroad with their family.

“And this whole damn family told me they only heard about it from the news. We were talking to them in their house and the mother said, ‘Allah, Allah. We didn’t see him.’ They lied to me, to my face. They knew exactly what happened. How can a mother – a mother who has eight children herself – lie to another mother’s face and say: ‘I don’t know what happened to your daughter’?” Feldman, who’s now trying to ban the family from Germany, revealed.

According to her, the prime suspect grinned brazenly into the camera, attending the scene with investigators, and showed no remorse.

Feldmann, who moved to Germany from Moldova with other people of Jewish descent in the 90s in accordance with a special government initiative, says she used to be open-minded about Angela Merkel’s letting refugees in since 2015.

“They tell the kindergarten kids: ‘Make friends with foreign children.’ That’s what I taught my children. Then, when you are 13-14 years old and going through puberty, it’s no wonder you hang out with people like that”, she revealed saying the daughter’s death changed her mindset.

READ MORE: AfD Jews: ‘We Won’t Let Ourselves Be Instrumentalized’

The Jerusalem Post reports that she wrote an open letter to Merkel, saying her daughter’s blood was on her hands and posted it on Facebook, which was deleted for violating the network’s guidelines. She re-posted a right-wing politician’s video on her Facebook account. After she shared a scandalous clip, showing a Green party member interrupting a moment of silence for Susanna, announced by the Alternative for Germany, for going against protocol. Some blamed her for being used by the right-wing, which she refutes.

“I don’t want my daughter to be used for politics, but you always have to keep your eyes open. I still have another daughter growing up. You should always be careful, always watch out, always…” Feldmann said.

A 14-year-old girl, Susanna F., from Mainz, was reported missing on May 22. Several days later her body was found hidden near a railway. Iraqi refugee Ali Bashar, who fled to his home country after the crime, but was arrested in northern Iraq’s Kurdish autonomy at the request of the German police, was charged with rape and murder, although he denies the rape allegations.

Incidentally, the Iraqi government has lodged a protest with Germany and its own autonomy over the “illegal” extradition of an Iraqi national. The German prosecution is now investigating head of the federal police Dieter Romann.

Ali Bashar arrived in Germany in 2015, at the height of the inflow of refugees and other migrants from North Africa and the Middle East. He was in the process of appealing the rejection of his asylum application. Police have said that he is suspected in a string of previous offences, including the rape of an 11-year-old.