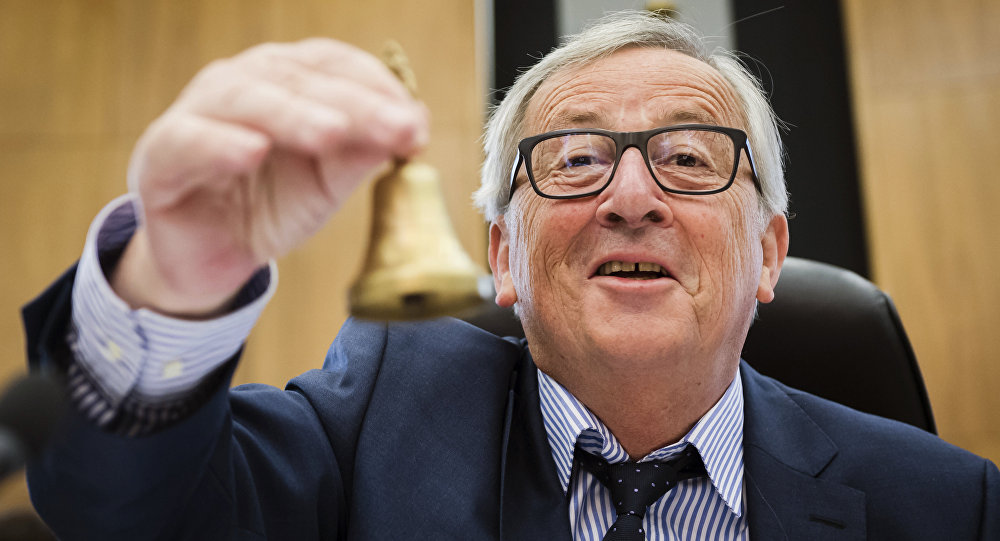 The EU Council meeting that gathered together the heads of the bloc’s states in Belgium this week was not only about Brexit talks and discussing all kinds of issues from the Yellow Vest protests to countering “fake news”. Its high-ranking participants let their human side out and had fun, even though this got weird at times.

European Commission President Jean-Claude Juncker, known for having a fancy for a good joke or expressing himself up front, has once again thrilled journalists and observers with his eccentricity over the two-day gathering in Brussels. Right after his arrival at the EC headquarters on the second day of talks, he puzzled colleagues by flipping the hair of a woman at the entrance as he passed by.

When No Words Are Needed

While the object of this awkward greeting seemed a little embarrassed, Juncker’s British colleague at the summit, UK Prime Minister Theresa May looked much more agitated during their seemingly heated exchange before a morning session on the very same day. The moment was caught on camera and went viral.

This doesn't exactly look like an exchange of pleasantries between Theresa May and Jean-Claude Juncker as the Brexit summit gets underway. #EUCO pic.twitter.com/l0r4NwDj8h

​May looked annoyed, while Juncker visibly tried to calm her down. As no audio was available, netizens tried to guess what the EU leader could have said to his colleague, probably overwhelmed by never-ending discussions of the UK’s post-Brexit relations with the European Union.

'Shall I dance for you?"
'Please don't Theresa.'
'Go on, just a little shimmy.'
'I don't think that will help.'
I can do the robot one again.'
'That's not going to…'
'Throw me a bone here, please, I have literally nothing else to offer.'

I’m a professional lip reader and she’s saying “it’s too early for a round of Jäger Bombs, Jean-Claude.” And then he says “fpshspghssfgppshshshs”

Juncker: "did I do anything inappropriate last night"?…. May: "you where a bit drunk Jean-Claude but for the sake of Brexit we'll say no"

​Papers in the Air

The European Commission president continued raging during a joint press conference on the summit’s outcome. Entering the hall, he jokingly tried to put his hand in front of a camera that was uncomfortably close, in a celebrity-like manner. As soon as he got up onto the podium and took his place at the tribune, he put a ream of paper on it. But then he suddenly cast the bundle onto the floor, drawing European Council President Donald Tusk’s attention. Juncker didn’t explain his gesture.

The European Commission president was not the only one who tried to take the heat off. Asked about one of the EU’s burning issues, the yellow vest protests spreading across Europe, Luxembourg’ Prime Minister Xavier Bettel and Romanian President Klaus Iohannis opted to make a joke instead.

“We have yellow vests in cars, but we use them only in case of an accident”, Iohannis said.

Bettel repeated his gag saying that in his country one can find yellow vests at towing services or in cars, boasting Luxembourg hasn’t seen protests for 25-30 years thanks to trilateral communication among workers, unions, and managers.