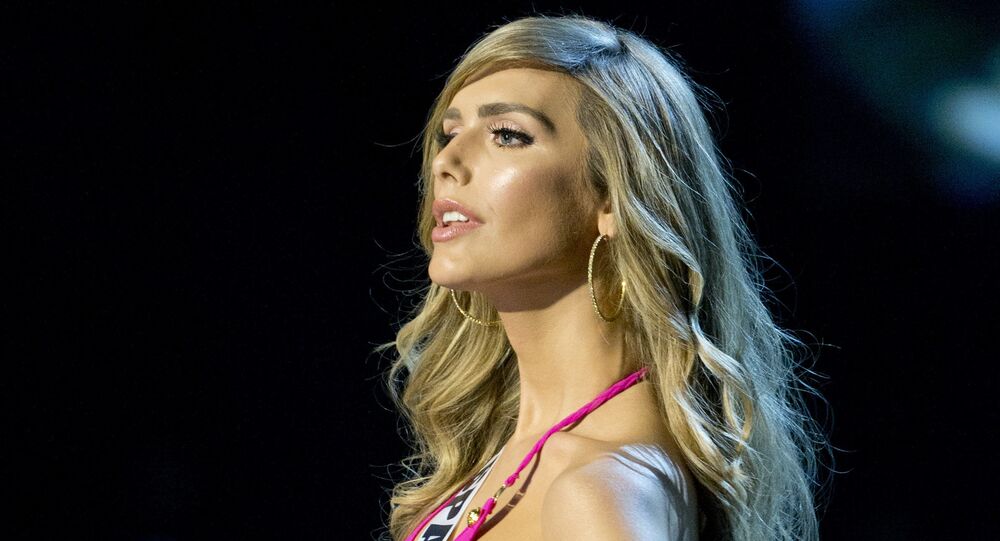 'It Doesn't Matter if You Have Vagina’: Trans Woman Sets Sights on Miss Universe

Spain’s Angela Ponce has already made history after becoming the first woman to be born male and win a national beauty pageant crown and compete in Miss Universe after contest organisers lifted a corresponding rule that only "naturally born" women could participate in 2012.

Spanish transgender woman Angela Ponce has spoken out about bullying and difficulties that she’s faced on the way to the crown ahead of the Miss Universe final, which is to take place in Thailand's capital Bangkok on 17 December.

The 27-year-old woman pulled off a flamenco dance during the national costume show, as well as struck viewers with a glimmering evening dress and crazy-pink swimsuit.

The woman, who has earlier voiced her commitment to promoting equal rights for the LGBTQ+ community and has had to deal with criticism over her participation, explained her decisiveness: "who hasn't suffered from prejudice? Who hasn't had to deal with bullying?"

Ponce, who works with a Spanish foundation providing help and counselling to trans children, has stated that negativity can be turned “into your biggest strength” and slammed prejudices and narrow views on gender.

“Outsiders say what I can and cannot do what I am and what I am not. No, I'm sorry. To be a woman is your identity. It doesn't matter if you are white, black, if you have a vagina… if you have a penis", the contestant told AFP.

She also couldn’t stay away from politics, commenting on the White House’s rumoured plans. The US Administration, led by former Miss Universe owner Donald Trump, is reportedly considering changing the laws concerning gender, defining it according to innate physical traits.

"I always say: having a vagina didn't transform me into a woman. I am a woman, already before birth, because my identity is here", she said.

Ponce, who is originally from Seville, had already taken part in the country’s Miss World Spain beauty pageant in 2015, but failed to secure the winner's crown. She still managed to snap an unprecedented victory in Miss Universe Spain this July and a historic ticket to the contest in Thailand.

After her victory, some opposed letting women who were born men join the competition. The new Miss Colombia, Valeria Morales, drew criticism after she suggested that transgender people shouldn’t compete for the sparkly Miss Universe tiara, alluding to Angela Ponce.

“I think that beauty shows like Miss Universe should be for women who are born women, and I think it would be a disadvantage for Ponce too. Therefore, we should respect her but not share it with her", Morales said in an interview with Colombian television, later being criticised for intolerance.

The Miss Universe beauty pageant ended a ban on transgender competitors in 2012. Around that time one of the potential contestants, Canadian transgender model Jenna Talackova threatened the Miss Universe beauty pageant, then owned by incumbent US President Donald Trump, with legal action. According to her, she was told that Canada’s Miss Universe pageant was only open to "naturally born females". However, the contest's organisers insisted that the change was made regardless of the looming suit.

Stunning Miss Universe – Iceland 2018 Turns Out to Be Russian