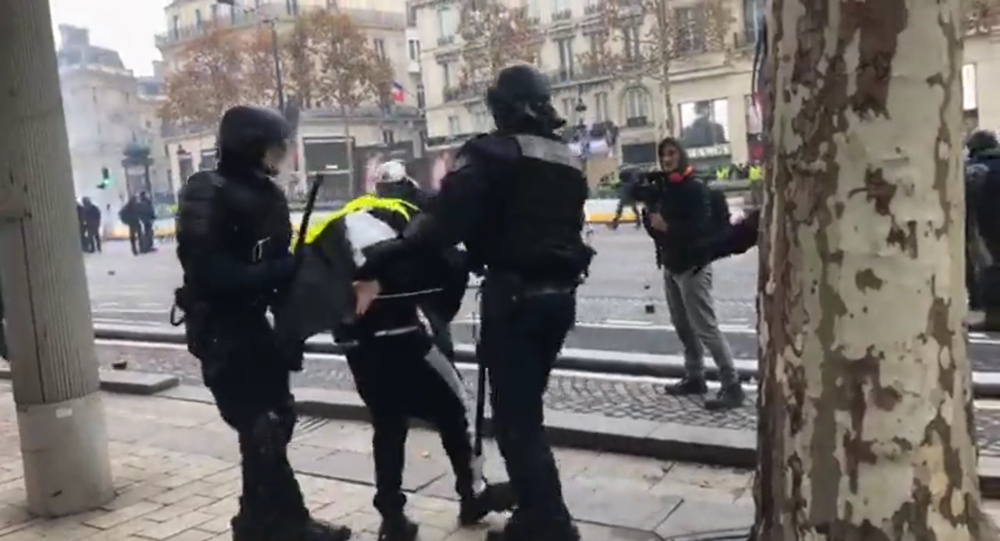 Total of 8,000 Policemen to Work During Yellow Vest Rally in Paris on Saturday

"Tomorrow, we will deploy forces and resources similar to those that were used last week… [as we want] to prepare for a worse case situation…. The number of security forces will be the same [as last week] — 8,000 people, as the prime minister said", Delpuech as broadcasted by RTL.

According to Delpuech, heavy weapons, mobile gendarmerie forces and 50 rapid response teams will be deployed to ensure security during the protest. The police chief added that the security forces would be also be put on duty at Paris train stations and on the roads.

The police's goal will be to "better control" the situation on Saturday compared with what happened last weekend, Delpuech noted.

At the same time, French Interior Minister Christophe Castaner said that the authorities would send additional forces to prevent an outbreak of violence at Saturday's rally amid a persistent terrorist threat.

"The attack [in Strasbourg] confirms that the terrorist threat still exists, and, despite our efforts, the attack may take place again… We will reinforce and adapt [forces providing security at protests] everywhere, where it is necessary," Castaner told the Europe 1 radio station.

© REUTERS / Benoit Tessier
Yellow Vests Have Created a Fertile Ground for Terrorists - General
The minister did not specify how many policemen and gendarmes would ensure the safety of the protests. He acknowledged that despite the weakening of the Daesh* terrorist group and the reduction of the threat of terrorist attacks brought from the outside, the terrorist threat inside France still persists.

Castaner recalled that three days prior to the first "yellow vest" rally, French police exposed a terrorist cell that planned an attack at demonstrations on November 17.

"Of course, [Daesh retains its influence, despite the weakening]. Therefore there is a threat of terrorist attacks… I can tell you that since November 17, there has not been an hour when I could live without realizing a threat of a terrorist attack, including at protest actions, because there is a huge number of people gathering there," the minister noted.

On Thursday, a lead activist of the French anti-fuel tax movement said that demonstrations would go ahead this weekend until all their demands are met, despite President Emmanuel Macron’s recently proposed economic relief measures.

On December 8, over 125,000 people took part in the "yellow vest" movement's protests across France, including 10,000 in Paris. The demonstrations were accompanied by clashes between protesters and the police, with the former throwing Molotov cocktails at the latter, burning cars, and vandalizing stores and restaurants. Gendarmes were forced to respond by using tear gas. Over 50 people were injured and over 600 protesters were detained as a result.

The wave of the so-called yellow vest protesters — named after the obligatory attribute of French drivers — started in France in mid-November. The French government has scrapped its planned hike in diesel taxes that sparked the protests, but the yellow vests have since morphed into a broader movement against government policies and rising living costs.

This Monday, Macron promised to increase the minimum wage and cancel taxes on low-income pensioners, among other measures, which many protesters say is not enough.

Yellow Vests Have Created a Fertile Ground for Terrorists - General