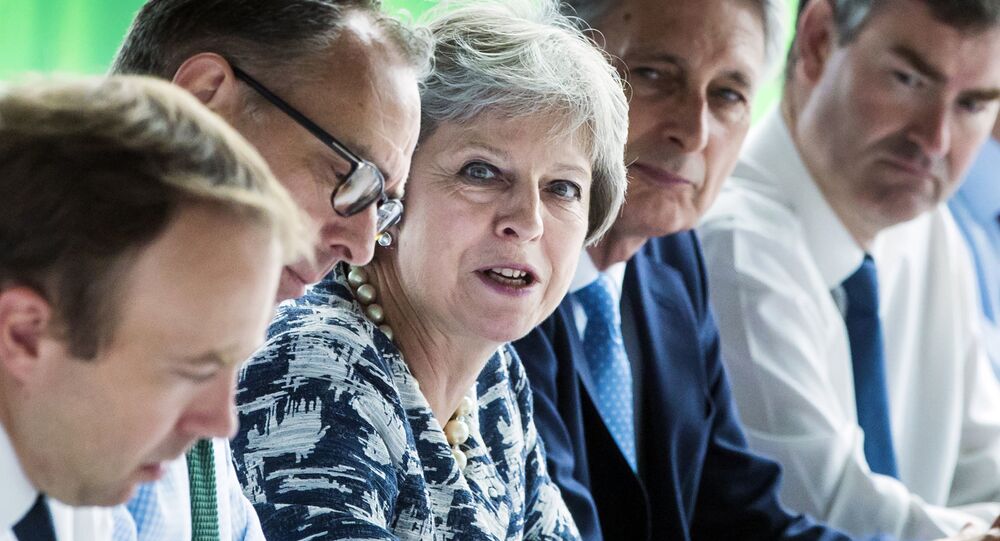 Britain is experiencing one of its worst political crises in the latest history, with the fate of the nation and its economic prosperity on the line.

As the British PM is set to contest tonight's vote of confidence in her leadership of the Conservative Party "with everything I've got," over a hundred of her MPs have already pledged allegiance to Theresa May.

After a series of resignations from Mrs. May's cabinet since she took on the post in 2017, unity among senior ministers in backing their leader was somewhat of a novelty. Almost all Cabinet ministers took on to Twitter to confirm their support for the PM and her strategy of delivering Brexit.

The Prime Minister has my full support. She works relentlessly hard for our country and is the best person to make sure we leave the EU on 29 March and continue to deliver our domestic agenda.

The Prime Minister has worked hard in the National interest since the day she took office and will have my full support in the vote tonight. Her deal means we leave the EU on time, whist protecting our jobs and our businesses.

The last thing our country needs right now is a Conservative Party leadership election. Will be seen as self-indulgent and wrong. PM has my full support and is best person to ensure we leave EU on 29 March

I am backing @theresa_may tonight. Being PM most difficult job imaginable right now and the last thing the country needs is a damaging and long leadership contest. Brexit was never going to be easy but she is the best person to make sure we actually leave the EU on March 29

I fully support the PM. This is a crucial stage with weeks to go before we leave the EU. We need to back @theresa_may and deliver the referendum result. The PM is working in our national interest and this distraction risks damaging uncertainty.

Just about to appear on @BBCr4today. Theresa May will have my full support. Removing her would be self indulgent and irresponsible.

I am giving my full support to @theresa_may who has always put the national interest first. We need to honour the outcome of the referendum and support the PM to deliver Brexit on 29 March 2019.

Huge positive response after my @BBCr4Today interview this morning where I made clear why we must back the PM. It’s clear the public want us to get on with Brexit & deliver for Britain — time to back @theresamay in the national interest

I admire the grit and determination the Prime Minister has shown and I strongly support her. The last thing businesses across our country need at this crucial time is even more uncertainty. I hope all my colleagues will join me & back @theresa_may

I will support the Prime Minister @theresa_may tonight. This is a totally inappropriate time to have a contest. The country expects us to provide stability not damaging division.

The PM has my full support. At this critical time we need to support and work with the PM to deliver on leaving the EU, & our domestic agenda — ambitious for improvements to people’s lives & to build on growth of wages & jobs.

Let’s all get behind @Theresa_May to complete the job on brexit and keep on delivering on jobs & growth and tackling injustices. A leadership challenge does nothing to secure brexit, and is the last thing our country, or the party, needs at this critical time.

Strongly support @theresa_may to continue as Leader of @Conservatives and Prime Minister. Now is not the time for this distraction and even more uncertainty. We need to get behind the Prime Minister in the best interests of our country.

The Prime Minister has my full support, not least because she has always done what she firmly believes is in the national interest. Our country needs us all to fight for a good deal and prepare for a no deal senario. All eyes and hands should be on that task.

I fully back our Prime Minister. We have the right Leader of our Party, we have a duty to deliver for our country & I hope all my colleagues will join me & support @theresa_may to deliver for UK.

I am backing the Prime Minister 100% — and I urge every Conservative MP to do the same. She is battling hard for our country and no one is better placed to ensure we deliver on the British people’s decision to leave the EU.

Despite the somewhat expected display of loyalty by the Cabinet and departmental ministers, the rest of the 315-seat Conservative Party is a blazing inferno of resentment, uncertainty and hunger for power.

One of the outspoken Brexiteers and critics of the current Brexit withdrawal agreement within the Tory party have been rumored to replace the PM at Downing Street.

The Country needs a new leader, it is time for Mrs May to resign.

Everyone can see the hideous choice that this deal imposes on this country: to accept law from Brussels – with no say – or else to accept the break up of the UK.

We must and can do much better https://t.co/P3XEJzM3CD

.@JoJohnsonUK — There is something much bigger at stake here than the leadership of the Conservative Party & that is the future of our country https://t.co/6V66rMGASU pic.twitter.com/kWWvZuMKxI

Stop asking!
We face a general election because we have no majority and DUP has withdrawn support for PM. So, the question I’m wrestling with is this: Am I confident to have TM lead me into another election?

A secret ballot of Mrs. May's Conservative lawmakers will be held between 1800 and 2000 GMT on Wednesday. The result of the vote will be announced at around 2100 GMT.