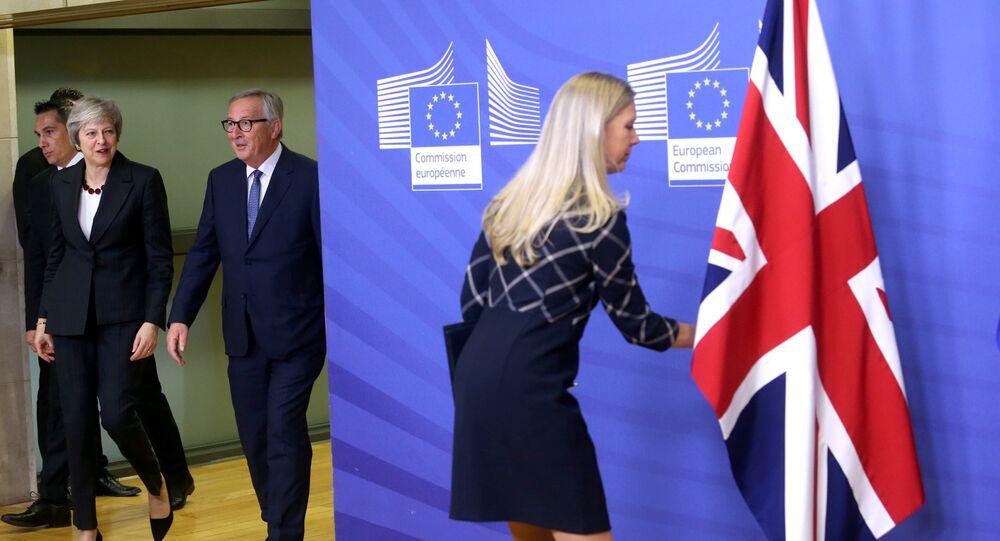 The statement comes after UK Prime Minister Theresa May said on Monday that she had delayed the "meaningful vote" on the Brexit deal with the EU, which had been previously scheduled for Tuesday night.

EU Commission President Jean-Claude Juncker has pointed out that there is "no room whatsoever for renegotiation" of the Brexit agreement between Brussels and London.

"The deal we have achieved is the best deal possible, the only deal possible… there is no room whatsoever for renegotiation. But, of course, there is room, if used intelligently, there is room enough to give further clarifications and further interpretations", Juncker said at a plenary session of the European Parliament.

The statement followed UK Prime Minister Theresa May's announcement that she had delayed the vote on the Brexit agreement with the EU, scheduled for Tuesday night.

May said that she will instead head to an EU summit in Brussels this week to discuss the "clear concerns" of MPs about her deal's so-called backstop arrangement.

"If we went ahead and held the vote tomorrow the deal would be rejected by a significant margin", May said, adding that she decided to delay the vote in order to "not to divide the House at this time".

READ MORE: 'It Would Be Crazy': UK Business Secretary Warns Against No-Deal Brexit

She pledged that she would seek further reassurances from Brussels on the Northern Irish border backstop, as it has caused the most concern among UK lawmakers.

Responding to May's statement, opposition leader Jeremy Corbyn claimed that she and her government had "lost control of events and is in complete disarray".

© REUTERS / Parbul TV
Brits Prefer Remaining in EU or Hard Brexit Over PM May's Deal – Poll
Earlier, May announced that her Cabinet had approved a Brexit deal and shortly after the announcement, a wave of resignations hit her Cabinet. So far, seven ministers have left the Cabinet, including Brexit Secretary Dominic Raab.

The Brexit agreement's most controversial propositions pertain to the future of EU citizens in the UK and British citizens residing in the EU, the framework of bilateral EU-UK trade relations, and the "regulatory regime proposed for Northern Ireland".