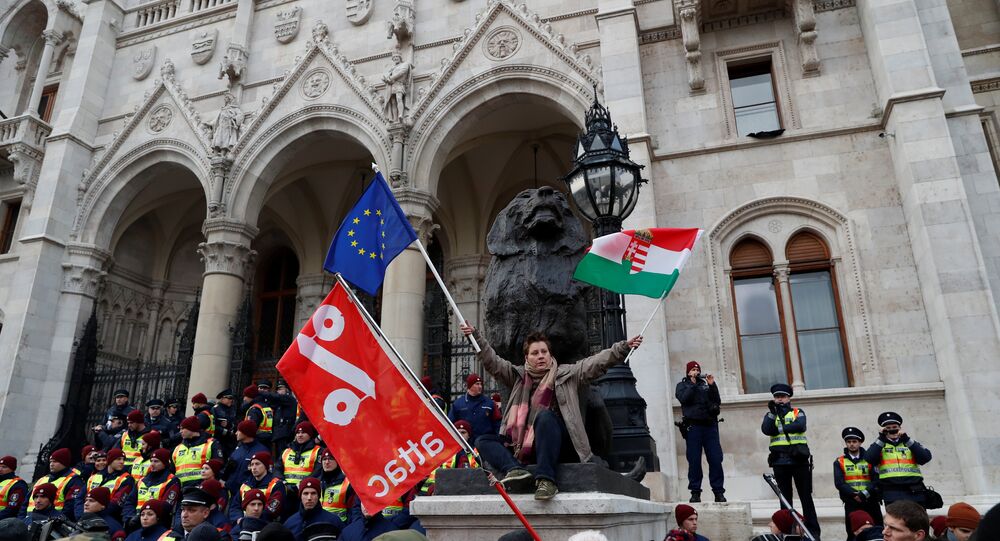 On Saturday, Hungarian trade unions protested a change in the country's labor code in Budapest, increasing a workers’ allowable overtime from 250 to 400 hours a year in a move union leaders have dubbed as a “slave law.”

Union workers claim that the law, which was proposed by the right-wing Fidesz party, headed by Prime Minister Victor Orban, is a way to increase Hungarian companies' profit at the expense of workers by adding an extra workday per week.

"We are all really upset about the way things are going in this country," Zoltan Laszlo, vice chairman of the Vasas ironworkers union, recently told Reuters. "This government just makes laws with scant consultation of those affected."

"Our health status is already abysmal. People who make these kinds of laws work against society. We'll show them that we can take our fate into our own hands. We are willing to turn a lot harsher," he added.

If passed, the legislation would mean that workers could be allowed to work up to 400 hours of overtime instead of 250 hours, the current maximum. In addition, employers would have three years, instead of the current one year, to compensate employees for overtime with either money or vacation time.

"This process is only about the suppression of employee interests and the prioritization of the interests of employers and the powers that be," said Jozsef Szilagyi, co-chair of the Hungarian Democratic League of Independent Trade Unions, AP reported.

"Those exercising political and economic power should understand that we are not robots."

The draft law, which was submitted to parliament by lawmakers from the Fidesz party, is expected to be voted on by the Hungarian parliament on Wednesday.

"In Hungary, we carry the largest burden on our back and, in return, we get the lowest wage in Europe," Laszlo Kordas, president of the Hungarian Trade Union Confederation, told protesters Saturday, cited by Al-Jazeera.