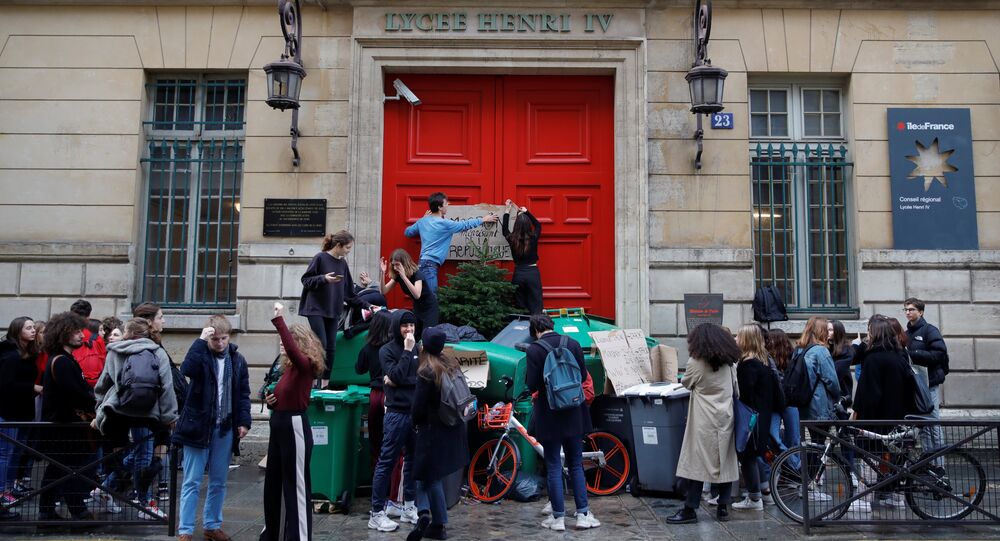 PARIS (Sputnik) - A massive rally of hundreds of high school students expressing their discontent with the new education reform and supporting the so-called yellow vest movement against rising fuel taxes, took place in Paris on Friday, a Sputnik correspondent reported.

The recent education reform in France complicates the selective process for entry into higher education institutions, and implies a significant increase in education fees for foreign students.

"Social unrest is on the rise in the country. 'Yellow vests' have taken to the streets, as people cannot tolerate anymore. We, young people, are also taking to the streets as we are the country's future. We are completing high school education and do not know what to do next, how to continue our education. The authorities have allegedly initiated a dialogue with us, but they do not listen to us," a representative of the lyceum students' association told Sputnik.

Young people have started gathering on the Place de la Bataille de Stalingrad, a square in the 19th district of Paris, at about 11 a.m. local time (10:00 GMT) on Friday. Every group of students coming to the square is welcomed with loud cheers, with the protest itself taking place in a calm atmosphere.

© AP Photo / Jacques Brinon
Students Protesting Reform Block Entrances to Some 100 Schools in France (VIDEO)
The so-called yellow vest protests, named after the reflective vests all French drivers are required to keep in their cars, have been ongoing in France since November 17. Diesel prices in France have risen by around 23 percent since the beginning of the year, while the gasoline prices have gone up by 15 percent. On Wednesday, French President Emmanuel Macron announced that he was abandoning a proposed fuel-tax hike following violent protests.