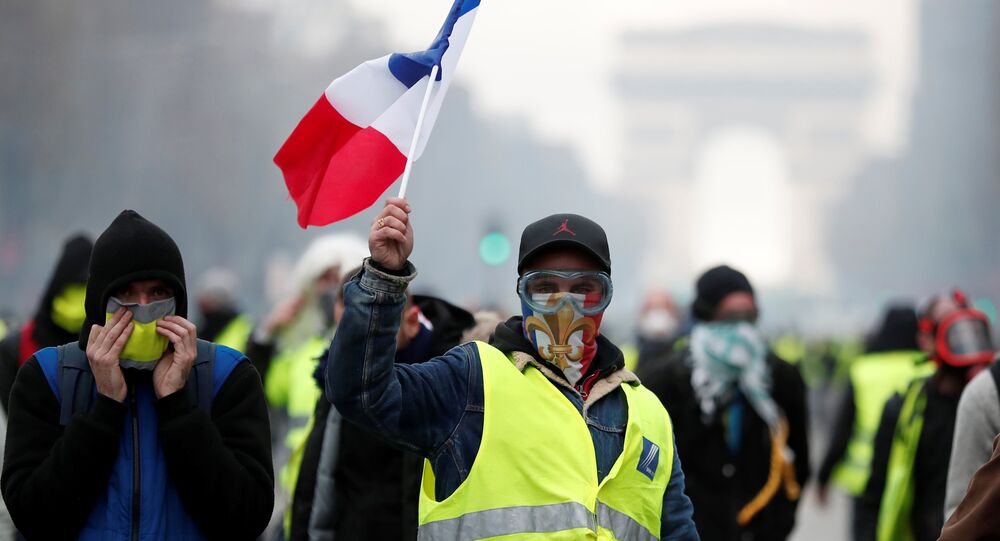 Ever since November 17, France has been engulfed by 'gilets jaunes'. Photos and videos of yellow vest-toting protesters engaged in incendiary political action have spread far and wide - some observers have suggested undercover police officers may be mingling among the high-vis throngs, stirring up trouble in order to discredit the movement.

The protesters' grievances are manifold — fuel prices, high and rising living costs, tax reforms disproportionately impacting the poor, and the leadership of ever-increasingly despised French President Emmanuel Macron, to name just some — and their uniforms highly symbolic. All French motorists have been required by law since 2008 to keep high-visibility vests in their vehicles in the interests of road safety — but it's not merely citizens of France who've been drawn to the fluorescent crusade, as similar protests have erupted in nearby Belgium and the Netherlands.

If skeptics are correct however, undercover agitators may also be donning the totemic garments, walking covertly among the infuriated masses and rousing the crowds to vandalism and violence. Rumours some protesters may not be what they seem began circulating on social media not long after the movement sprouted, and quickly reached such a crescendo France's national police took to Twitter to counter the swelling accusation.

They told users to "beware of #fakenews" claims of "police officers in civilian clothing going undercover to break things."

"This is false. Like with all protests, police officers in civilian clothing discreetly make arrests and collect information on the march's movements," they added.

It's not merely officials who've sought to dismiss such suggestions — French photojournalist Louis Witter, who's covered numerous protests in the country, told France 24  the notion police officers were acting as agent provocateurs was "complete fantasy".

"It's routine to see police officers in civilian clothing assigned to follow the action and arrest protesters who have committed violent acts," he explained.

Nonetheless, some videos purporting to show ‘agents infiltre' at work provide somewhat compelling evidence of undercover operatives present among the yellow-vested multitudes, even if none document officers inciting violent actions.

Perhaps the most infamous clip to be uploaded to date — uploaded December 1, it's garnered almost six million views and over 7,000 shares in under a week — depicts masked individuals ambling through Paris' renowned Champs-Elysees. While they're in plain clothes, and some legitimate protesters have worn masks, the procession all wear red armbands, a signifier of plain-clothes police in France.

"Look close, they're the real casseurs [rioters]," the filmer says.

While it's yet to rack up a comparable number of views, another is far more suggestive — in it, a group of individuals walk disconsolately away from a large crowd of protesters, booed and jeered at by the mob every step of the way. Some wear helmets and masks — one a high-vis vest.

"Look! There they are! The civilian cops…they will break things and people will think it's the gilets jaunes. They have infiltrated us. Casseurs! Casseurs!" the camerawoman intones.

Whatever the truth of the matter, there are certainly several documented instances of French police posing as ‘casseurs' being caught in the act, most notoriously Gerard Le Xuan in 1979.

In the wake of the mass-layoff of 20,000 steelworkers in north-east France in 1978, protests raged across the region throughout 1979 — at one action, a rioter was apprehended by the General Confederation of Labor's security service in the process of smashing a storefront. A search of the impassioned insurrectionist turned up Le Xuan's service weapon and police ID card.

More generally though, undercover policing has potentially always blurred lines between surveillance and provocation. In the UK for instance, the country's earliest known police infiltrator penetrated the National Political Union — a group that campaigned for the extension of the voting franchise beyond the rich — in 1832.

© Sputnik
'I Wouldn't Have Consented to Sex if I Knew He Was Undercover Police' - Activist
The organization eventually collapsed — a subsequent parliamentary committee found the officer acted as an agent provocateur, playing a pivotal role in disrupting the movement. Just over half a century later, a Special Branch agent was the primary instigator of a foiled conspiracy to blow up Queen Victoria during her Golden Jubilee.

More recently, animal rights activist Geoff Sheppard alleged Special Demonstration Squad (SDS) operative Bob Lambert — who spent years living among protest groups under the identity ‘Bob Robinson', fathering a child with an activist in the process — planted an incendiary device at the Harrow branch of British department chain Debenhams in July 1987 as part of a campaign against the sale of fur.

"Obviously I wasn't there when he targeted the store because we all headed off in our separate directions but I was lying in bed that night, and the news came over on the World Service three Debenhams stores had had arson attacks…that included the Harrow store as well. I straight away knew Bob carried out his part of the plan. There's absolutely no doubt in my mind Lambert placed the incendiary device. I specifically remember him giving an explanation to me about how he'd been able to, but had not [placed] the second device," Sheppard said.

© Photo : Pixabay
EXCLUSIVE: Landmark Hearing Sides With Activist in Battle Against UK 'Spycops'
In December 2014, Sheppard also claimed SDS officer ‘Matt Rayner' (a pseudonym) encouraged — and assisted — some of his illegal activites, lodging an appeal to overturn his convictions for possessing a shotgun and components for an incendiary device.

He alleged Rayner coaxed him to purchase the shotgun, and offered to stump up the cash for the weapon — along with asking for instructions on how to make an incendiary device and testing the ‘recipe' at least once, and prompting Sheppard to commit crimes he'd been initially unwilling to carry out.