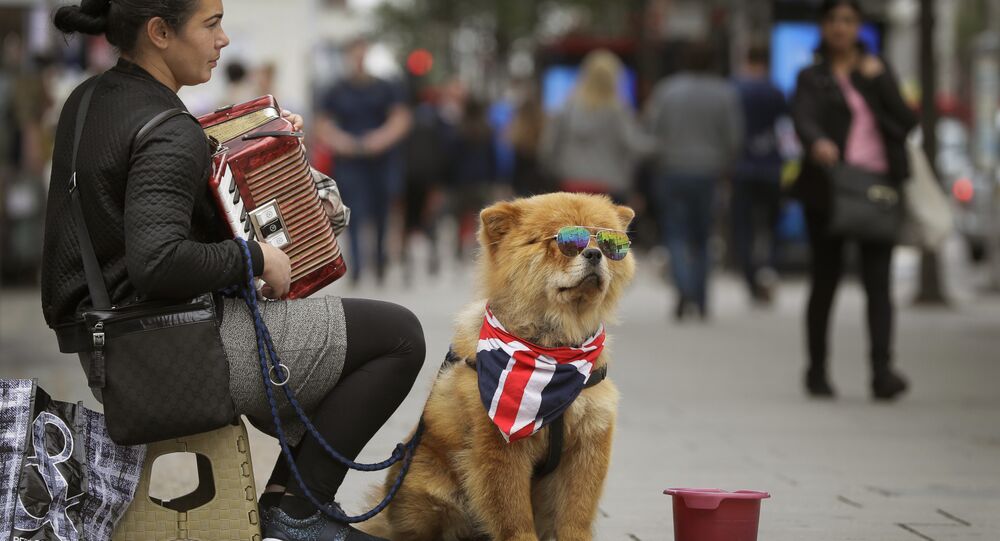 Councillors across London, including Westminster and Chelsea, plan to cite the 2014 Anti-social Behaviour, Crime and Policing Act, which targets the "use of amplified noise equipment in vicinity of the Palace of Westminster" and other offences.

London councillors can already slap buskers with £1,000 fines under the 2000 London Local Authorities Act, with Camden and Hillingdon councils previously adopting the law. Camden has mandated all buskers to carry a £19 licence for non-amplified performances and £47 with amplification.

While busking is not illegal, new legislation has complicated matters. The Home Office asserts that PSPOs "do not criminalise or seek to ban busking" and only offers guidance to councils on how to use them, a spokesperson said as quoted by the Guardian.

But some disagree, stating that councils want to use the legislation against street performers, despite the House of Lords saying it would not do so.

© AP Photo / AP Photo/Jenny Kane
‘Cat & Mouse’: US Music Trade Groups Press to Make Unpaid Streaming a Felony
"The fact that none have yet been successful is largely due to campaigning organisations, but the constant threat of PSPOs remains," street performer David Fisher told the Guardian.

The Dundee city council has invoked the 1982 Civic Government (Scotland) Act to the chagrin on many performing artists.

"Most of my songs are no longer viable as I do a lot of fingerpicking on the guitar and softer singing," student and Glasgow native Maria McAveety said. "I'm restricted to songs I can get enough volume on to be heard, so my throat is under significant strain."

"Also, because I'm having to play guitar louder, I'm breaking more strings," she added. "It's significantly reducing the quality of my performance and those of my fellow buskers."

However, some councils allow busking without licencing requirements. "Everyone is welcome to busk on public land in Birmingham, no licence is required," the Birmingham city council website says. "However, your performance should be considerate of those around you."

READ MORE: UK Tribunal to Decide if Veganism Should be Protected Like Religious Belief

Others have disputed the credibility of such PSPOs and claim that the ordinances are used to blanket target other demographics.

"It was becoming clear a year and a half ago that these powers were being used extensively in an inappropriate and disproportionate way," busking advocate Lord Clement-Jones said in a 2016 House of Lords speech. "In fact, they were not just being used inappropriately to ban busking, they were being invoked for much wider purposes—for instance, to ban the homeless from the streets."

Lord Clement-Jones also cited a Manifesto Club report highlighting the "extensive and disproportionate use" of PSPOs across Britain.

"Liverpool introduced a voluntary code of conduct that regulates the level of amplification, where buskers perform and how they approach people, and it worked perfectly well," Lord Clement-Jones told the Guardian. "An enlightened council can negotiate busking. Transport for London has a really good scheme for buskers — they audition them and have rules, but London's underground stations are a lively busking community."

A University of Westminster MusicTank survey of 1,000 residents in Covent Garden, Portobello Road, Trafalgar Square and others found that 86 percent of tourists and 84 percent of residents favoured busking or had no opinion, as opposed to 1 percent having concerns about crowd safety.

Keep Streets Live director Chester Bingley and other are offering voluntary busking guidance to performers and councils, and argues that hostility towards buskers has become formalised to affect performers unaware of British law.

"It was only in the 1980s that British courts finally established that buskers were not committing an offence under the 1824 Vagrancy Act," Mr. Bingley said, "so the atmosphere is considerably less hostile now."

"Since then it's been necessary to prove loss and/or harm in order to prevent street performance, although this has been misused against buskers who have either not possessed the legal knowledge or confidence to use it in the face of an officer threatening them with arrest or a fine."