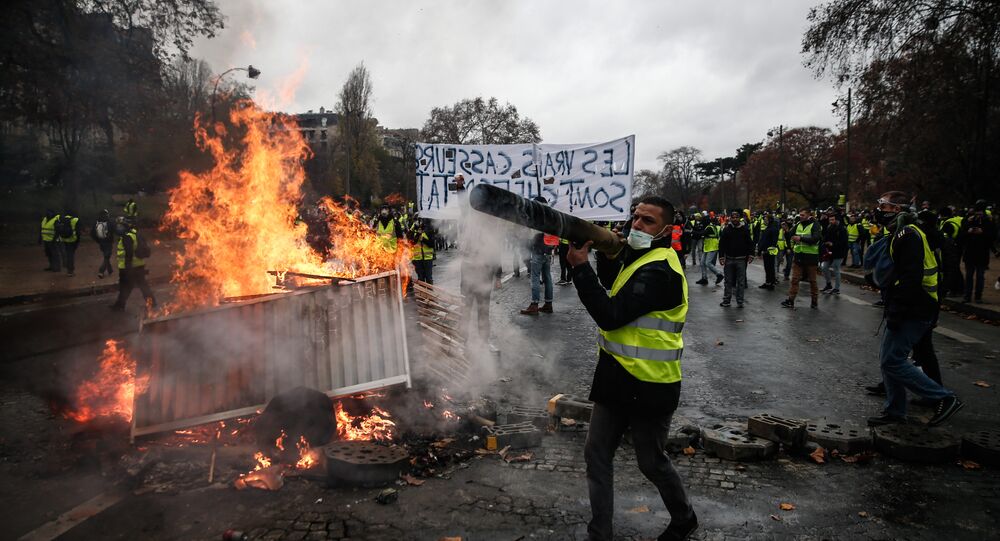 Since mid-November, mass protests against rising fuel prices have been taking place in France with demonstrations in the centre of Paris that have resulted in riots and hundreds of protesters being detained.

French Prime Minister Edouard Philippe has declared a 6-month moratorium on the increase in fuel taxes, which have led to mass demonstrations and unrest in the country.

The minister has also frozen electricity and gas price hikes for three months.

"Three fiscal measures were to enter force on 1 January next year… Having heard this demand expressed by almost all of the interlocutors I have met throughout consultations in recent days, I am suspending for six months these fiscal measures", Philippe said.

The measures in question include the carbon tax on petrol, fuel and diesel to which the so-called Yellow Vests movement violently objected.

The prime minister also proposed to hold a nationwide debate devoted to possible changes in the tax system that will last from 15 December 2018 through 1 March 2019.

"Finally, I want to propose holding a big debate on taxes and government spending. We need more transparency on taxes in France. Our taxes are the highest in Europe, while our tax system is extremely complex and often criticised because it seems to be unfair. Let's talk about the changes it needs… These consultations will not look like any others. Of course, there will be a dialogue at the national level. The debate must be held as close as possible to the French people throughout the diversity of our territories… This debate will begin from 15 December and end on 1 March", Philippe said.

© AFP 2021 / STEPHANE DE SAKUTIN
We're in New Political Age: It Will Be Difficult for Macron to Concede - Scholar
According to AFP, the minister announced the government's decision while meeting with the party La Republique En Marche! (The Republic on the move!).

Earlier in the day, the prime minister said that a total of four people had been killed in France and hundreds of others injured since the start of violent "yellow vest" protests against fuel price rises.

The French government earlier officially cancelled a meeting with yellow vest protestors that was scheduled for 4 December, France24 reported.

While Emmanuel Macron threatened not to back down on the anti-pollution fuel taxes that sparked protests, the government has indicated that it might make concessions.

Saturday's protests in Paris were followed by significant clashes between demonstrators and the police, riots, and cars being torched. During the riots that engulfed the French capital, 412 people were detained and 133 were injured during the protests, including 23 security officials.