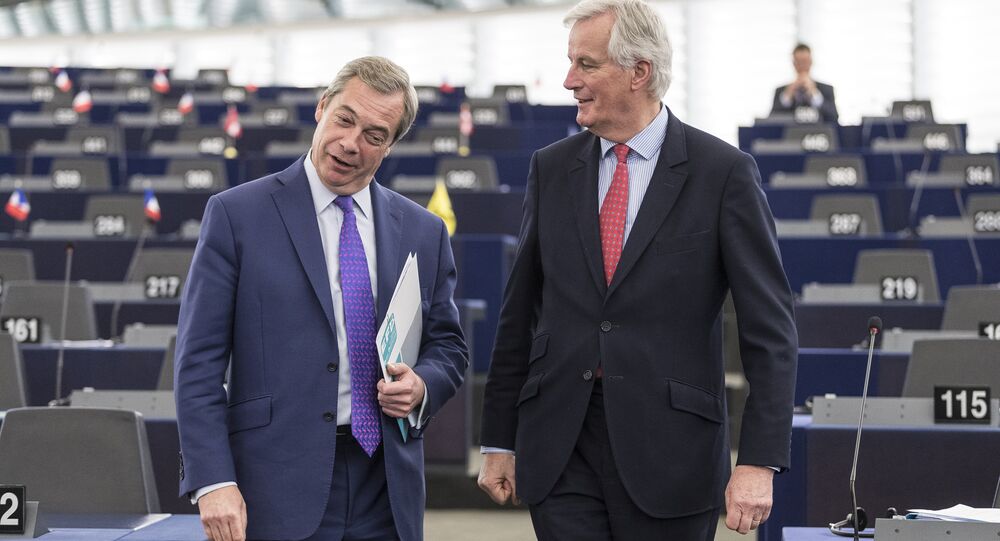 With EU's chief Brexit negotiator sitting next to him, the former UK Independence Party (UKIP) leader and current MEP Nigel Farage argued that Britain's withdrawal arrangements added up to the "worst deal in history" for the UK.

"I wish you were on our side because it's game, set and match to you. You probably can't believe your luck that you have come up against a British prime minister who met every single demand all while, at the same time, trying to deceive the British public," Mr. Farage said, addressing Michel Barnier.

I just told @MichelBarnier British Parliament will reject the worst deal in history. There is a strong chance now of the UK leaving with a WTO No Deal. pic.twitter.com/js1HZ379UD

The UK Parliament is set to discuss and vote on the Brexit withdrawal agreement soiled by Theresa May and the EU27 in a series of meetings up until December 12. Addressing the EU Parliament and the Mr. Barnier, Mr. Farage suggested that the deal is not going to be accepted at home by UK lawmakers.

"Mr. Barnier, you say this is the only possible deal, but this deal isn't going to be accepted. So perhaps we all need to grow up and actually recognise that there is a strong chance now of the UK leaving on March 29 on a WTO no deal. We need a negotiated deal to deal with sensible border issues. I wonder Mr Barnier, are you prepared for that? Because you seem this morning to have assumed that the British Parliament is going to ratify that," ex-UK chief said.

He also spoke about the issue that has become a thorn in the side of a large and diverse group of MPs — the question of the Irish backstop.

Arlene Foster, the leader of the Democratic Unionist Party (DUP), said on Thursday a better Brexit deal was needed.

"Let us not waste time on this deal where there is no enthusiasm and it's very clear to me that it is not going to get support in the House of Commons. Let us look for a better deal," Foster said.

Mr. Farage echoed the concern of the DUP leader and in his address to the EU Parliament, said:

"There is the backstop, which means that the United Kingdom can be held effectively a hostage for many years to come."

Following the agreement struck over the weekend, Theresa May has been touring the country in an effort to gain support for the agreement ahead of the Parliament vote.

PM @Theresa_May visited @QUBelfast this afternoon, where she had discussions with employers, students and academics #BackTheBrexitDeal pic.twitter.com/9sAssmTSa7

PM @Theresa_May was in Scotland today where she visited the Bridge of Weir leather factory and discussed the Brexit deal and the opportunities it brings for Scotland. #BackTheBrexitDeal pic.twitter.com/gyQuTEsnI0