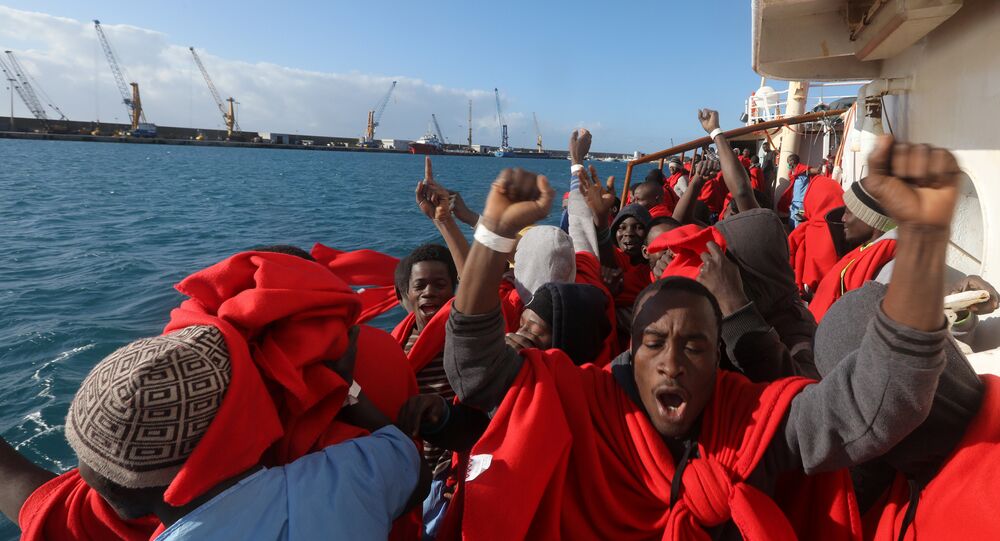 The most alarming article of the forthcoming UN migration pact is to make it the authorities' duty to ensure that immigration is referred to in positive terms, a senior member of the anti-immigration Norwegian Progress Party has ventured, stressing that the agreement was considerably more forceful than initially claimed.

Right-wing Progress Party foreign policy spokesman Christian Tybring-Gjedde has slammed the Global Compact for Safe, Orderly and Regular Migration (GCM), which is being pushed by various NGOs, arguing it paves the way for regular migration 'from the poor to the rich parts of the world'.

While Norway previously announced its readiness to join GCM, the Progress Party opposes the agreement by stressing it could apply to as many as 250 million people. In an opinion piece published in the Aftenposten daily, Tybring-Gjedde warned his compatriots of its pitfalls.

Tybring-Gjedde pointed out that the so-called Marrakesh agreement is slanted as it is has been prepared with input from over 5,000 NGOs and is being pushed by interest organisations with a political bias.

While highlighting a lack of adequate debate on this matter, Tybring-Gjedde stressed that the document nevertheless was met with considerable resistance across the Western world, with the US, Australian, Poland, the Czech Republic, Hungary, Israel, Japan, Estonia, Macedonia, Bulgaria, and Austria announcing they won't sign the agreement in order to maintain national sovereignty over their immigration policy after discovering its consequences. Political debate related to accession is currently taking place in Croatia, Slovakia, Denmark, the Netherlands, Lithuania, Switzerland, and Germany. In Belgium, the debate is so intense that it may lead to a government crisis, Tybring-Gjedde pointed out.

'In several countries, the debate about GCM has been intense and emotional. The reason for this is the wording of the text. For instance, the word "commitment" has been repeated more than 80 times in the document', Tybring-Gjedde wrote, calling it 'soft law' and venturing it could become a reference document for the European Human Rights Commission (ECHR).

The Progress Party politician also stressed that despite being billed as 'advisory' the agreement includes objectives and obligations that indicate its legally binding status. According to Tybring-Gjedde, GCM will make illegal immigration legal, effectively erasing the difference between them.

'Article 27 states that what is currently defined as illegal arrival or stay will no longer be deemed to be illegal. As one of GCM's premier contributors, Louise Arbor, clearly stated: "Migrants have rights. Migrants are human. Therefore migration is a human right"', Tybring-Gjedde wrote.

Among others, Tybring-Gjedde referred to Article 21, which urges the parties to develop solutions for so-called 'climate migrants' who have been forced to leave their respective countries due to natural disasters, climate change, rising sea levels, and droughts, to name a few. The solutions could potentially include a change of visa rules, he pointed out.

Article 37, making the recipient country responsible for the relocation of migrants to their home countries, is another one that caught his attention. This article also proposed banning forced deportation until the human rights situation in the target country has settled.

Tybring-Gjedde also objected to the proposed facilitation of family re-unification and entitlement of migrants to benefits and public funds from day one, which would make the authorities responsible for ensuring residence and providing legal assistance.

According to the Norwegian politician, though, the most alarming feature of the new migration pact is Article 33, which governs authorities' duty to ensure that immigration is presented to the population in a positive way, which is described as 'quality reporting'. Accordingly, the recipient countries will be forced to invest public funds in 'ethical' journalism and promotion of tolerance, Tybring-Gjedde warned.

The Global Compact for Migration is expected to be adopted at a Marrakesh conference in Morocco on 10-11 December, whereupon it will be formalised as a UN resolution.

In 2017, Norway's immigrant population consisted of over 880,000 people, making up about 17 percent of the country's total population.