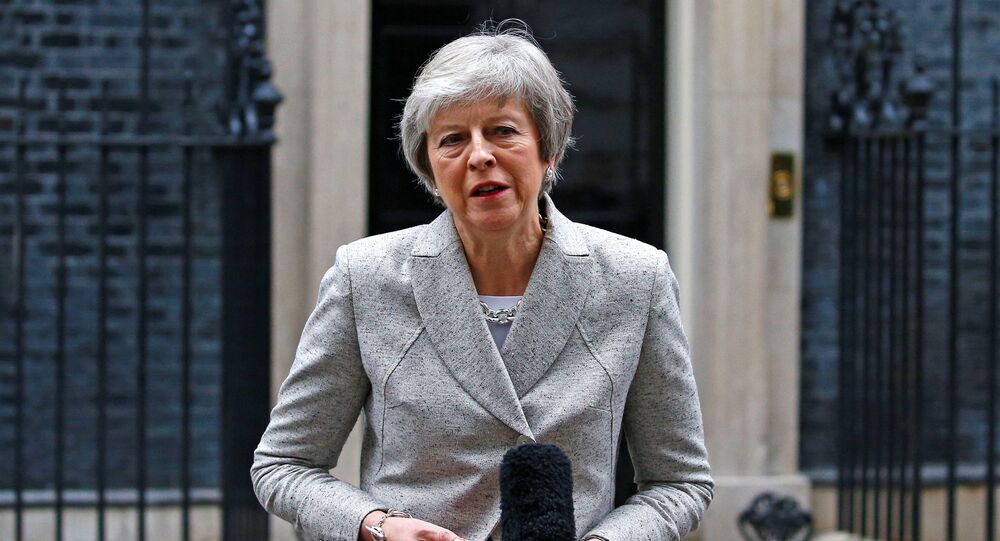 The House of Commons of the British Parliament will hold a final vote on Brexit agreement with the EU on Brexit on December 11, UK Prime Minister Theresa May said Monday.

"I'm looking ahead to 11 December and to when this House will be faced with the decision as to whether or not it wishes to deliver on the vote of the British people with a deal that not only delivers that vote but also protects their jobs," May said at a parliament session.

Speaking at the parliament sessiong the Prime Minister, the current option is "the best possible" and "the only possible" deal that would ensure a "bright future" for the country.

© REUTERS / Toby Melville
Theresa May's Brexit Deal May Cost UK Economy '£100bn' by 2030, Says New Report
The PM addressed the House of Commons on Monday as part of her effort to win over the MPs' approval of the Brexit withdrawal deal, agreed with the European Union.

"There is a choice which this house will have to make. We can back this deal… or this house can choose to reject this deal and go back to square one," May told parliament.

"Because no-one knows what would happen if this deal doesn't pass, it would open the door to more division and more uncertainty, with all the risks that will entail."

Theresa May also told the MPs it was "absolutely clear" the UK will be able to negotiate free trade deals under the terms of her Brexit agreement.

Theresa May nelieves that Brexit deal will secure "a broadest security partnership" in history of the bloc.

"At the outset, we were told that being outside of free movement and outside of the Schengen Area, we would be treated like any other non-EU state on security. But this deal delivers the broadest security partnership in the EU’s history," May said in her address to the lower house of parliament.

The Brexit deal includes data exchange between the sides on passengers’ name records, fingerprints, wanted and missing persons, among cooperation on other issues, according to the prime minister.

May went on to note that the divorce agreement envisages the creation of a free trade zone between London and Brussels without tariffs and fees.

"An unprecedented economic relationship that no other major economy has. It includes liberalization in trade and services way beyond WTO commitments … It includes new arrangement for our financial services sector, ensuring market access cannot be withdrawn on a whim," the prime minister underlined.

However, a former member of May's Cabinet and an outspoken Brexiteer, Boris Johnson, said it was an "understatement" to call the PM's Brexit deal "unsatisfactory".

He told the MPs the UK can't stay in the customs union and single market, as well as do independent trade deals.

WATCH | Boris Johnson catches May speaking out of both sides of her mouth. "These claims can't both be right — which is it?!"

The UK Parliament will review and vote on the deal on December 12, and with the opposition Labour party, the Democratic Unionist Party (DUP), the SNP and even Tory MPS set to vote the deal down — Theresa May is facing a tough reception back home.

The Prime Minister is at the despatch box, but has nothing new to say. This is a seriously poor deal. I will vote against it.

It might be an inconvenient truth for @theresa_may — but a majority want a #PeoplesVote.

Instead of a tour to “sell” her bungled deal, why doesn't she try *listening* to the people and deliver the #PeoplesVote the majority want?

My question to the PM. pic.twitter.com/jyFSzMWKWz

Labour Party leader Jeremy Corbyn told the MPs that there is a sensible deal that could win the support of the House of Commons — one "based on a comprehensive customs union and strong single market deal that protects rights at work and environmental safeguards."

“It is not in the national interest for the Prime Minister to plough on, when it is clear this deal does not have the support of either this House or the country at large” — @jeremycorbyn

The deal struck by Theresa May and the EU 27 will see to end freedom of movement "in full and once and for all," protect the constitutional integrity of the UK, and ensure a return to "laws being made in our country by democratically elected politicians interpreted and enforced by British courts".

​The 599-page deal also covers Britain's £39 billion "divorce bill", which prompted a Tory Brexiteer Jacob Rees-Mogg to question the PM about the sum.

A very sensible question from @Jacob_Rees_Mogg. What is the UK getting for £39bn of taxpayer money? pic.twitter.com/UZaNGzKnOl

"There are legal obligations that this country would hold to the European Union in relation to financial payments in any circumstances. As I've said before, I think it is important we are a country that upholds its legal obligations," the PM retorted.

Mrs. May's political spokesman said on Monday that the PM is confident of winning the parliament's vote on her Brexit deal, adding that the government was focused on winning the vote at the first attempt.