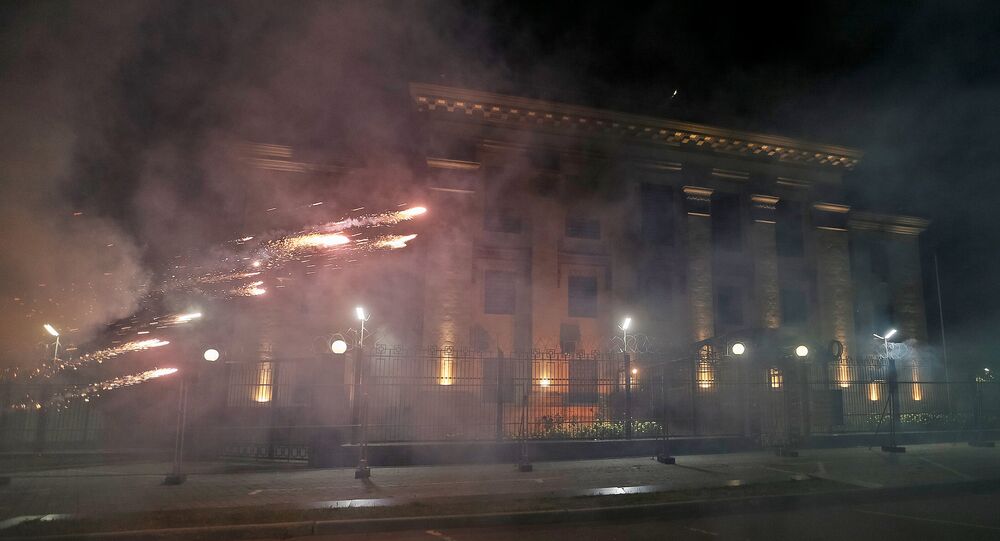 KIEV (Sputnik) - Earlier in the day, media reported that some radical activists had brought tires and paper ships to the main entrance of the Russian embassy.

According to the broadcast of the 112 Ukraine channel, radicals threw smoke bombs and smoke flares at the Russian Embassy in Kiev. Law enforcement officers are working at the scene, in particular, Kiev police chief Andriy Kryschenko arrived there.

The National Security and Defense Council of Ukraine decided on Monday to impose martial law in the country for 60 days. The proposal  was supported by President Petro Poroshenko.

Crowds outside the Russian Embassy in Kyiv are chanting "Death to Russia! Death to Russia!" following the naval incident in the #KerchStraight #Ukraine pic.twitter.com/1grTlkPA1J

On Sunday, three ships of the Ukrainian Navy, in violation of Articles 19 and 21 of the UN Convention on the Law of the Sea, crossed the Russian sea border, entered the temporarily closed area of the Russian territorial waters and were moving from the Black Sea toward the Kerch Strait, according to the Russian Federal Security Service.

Another group of ships was heading for the Kerch Strait from the Azov Sea port of Berdyans'k. The Kerch Strait, which links Black and Azov seas, was closed on Sunday for civilian ships for security reasons. Later the same day, the FSB reported that the same three ships of the Ukrainian Navy — Berdyansk, Nikopol and Yany Kapu — had been detained after violating Russian state border. The Ukrainian ships did not react to legal demands of the ships accompanying them and made dangerous maneuvers, the FSB noted.