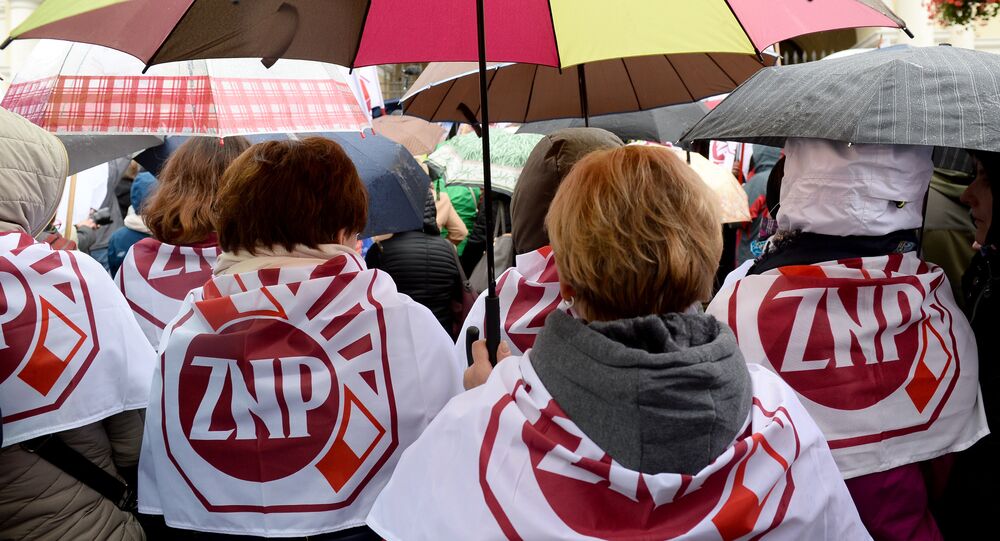 The probe follows an inspection of Open Dialogue's finances, which led the National Revenue Administration to conclude the Foundation's publishjed donors "do not correspond to reality"

"According to the foundation's documents, most of the funds channelled to it came from people who were members of the foundation's authorities or from individuals and businesses linked to them. [However they] may have come from other sources," security services spokesperson Stanislaw Zaryn said.

The NRA audit found funds from Silk Road, a company owned by Kozlovska's husband Bartosz Kramek, received payments from businesses registered in virtual offices in Britain totalling over half a million US dollars. Businesses transferring the funds were owned by companies registered in offshore tax havens such as Seychelles, Belize and Panama, some of which were embroiled in the Panama Papers scandal. As a result, the NRA suggested the funds "may have been criminal in origin".

© AP Photo / Alik Keplicz
In this Thursday, Dec. 15, 2016 photo a protester raises a communist-era sign reading "Photographing Forbidden", during a journalists protest in front of the parliament in Warsaw, Poland, against the ruling Law and Justice party plans to impose new rules starting Jan. 1 that would drastically limit reporters' access in parliament
Controversial History

The security service investigation is just the latest scandal to rock the shadowy NGO. National media slammed Open Dialogue in 2017 for allegedly drawing up a 16-point plan to overthrow the Polish government.

Moreover, while the Foundation has a long history of voiciferously criticizing Moscow, for instance lobbying for greater EU sanctions on Russian politicians and organizations and calling for Interpol Vice-President Oleksandr Prokopchuk to be banned from becoming President, certain Polish news outlets have claimed the organization has ties with the Kremlin.

Such allegations are motivated by Kozlovska's brother and mother apparently holding Russian passports, claims the NGO chief vehemently denies, instead suggesting she, her husband and the organization are being punished for their open opposition to Poland's ruling Law and Justice party. Her husband published an open manifesto in July that year calling for widespread civil disobedience in Poland, stating "mere protests and appeals are not enough, extraordinary and resolute actions based on the idea of civil disobedience must be taken immediately."

© REUTERS / Adam Stepien/Agencja Gazeta
Demonstrators gather outside the Parliament building during a protest in Warsaw, Poland, January 11, 2017
This, Kozlovska claims, led to a "smear campaign" against the couple.

"If I am a Russian agent why would I put people around Putin on a sanctions list? It's nonsense that I am some kind of agent," she told Associated Press.

Despite her denials, in August Poland used its powers as an EU member state to ban her from all 26 countries in the Schengen area, on the basis she poses a security threat — a move forcing her and her husband to live apart, or relocate outside the Schengen Area. She was stopped on August 13 at Brussels' Zaventem airport after flying in from Kiev, held overnight and placed on an early flight back to Ukraine the next morning.

Black lists against democracy activists are worthy of authoritarian regimes, not of EU Member States. The Schengen visa ban on Lyudmila Kozlowska must be withdrawn — or Poland’s role in Schengen reviewed https://t.co/0sh1nTqrEY

Whatever the truth of the matter, Kozlovska has been granted temporary visas by numerous European countries to address a number of bodies, including the Council of Europe, the UK House of Commons, the United Nations and the Austrian parliament — and the European Parliament's ALDE group has repeatedly written to the European Commission, demanding her ban be revoked and an infringement procedure be opened against Poland on the basis of the country "failing to fulfil an obligation under treaties".

EU Can Toss Poland Out for Non-Compliance With Judicial Standards