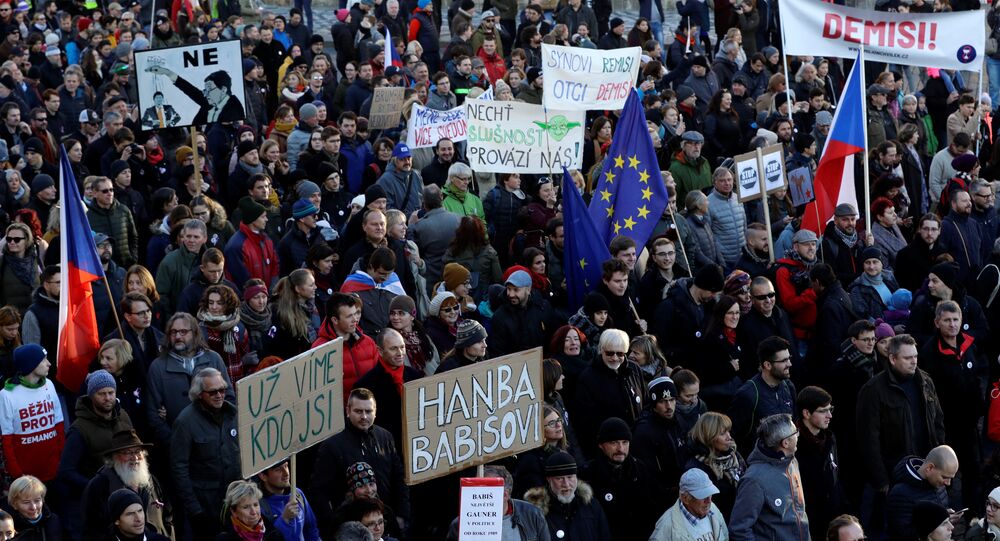 The leaders of six Czech opposition parties issued a joint statement on November 13 calling on the government to resign due to Babis’ alleged move to kidnap his son and take him to Crimea in order to prevent him from testifying in a fraud probe.

Protesters took to the streets in Prague calling on Prime Minister Andrej Babis to step down amid an investigation into him on November 17, according to organisers of the rally.

Some 20,000 people participated in the rallies, shouting "resign" and "we don't want a prosecuted PM."

Social media users have posted photos and videos of the event online.

The protests were timed to the 29th anniversary of the beginning of the revolution that resulted at the end of Communist rule in Czechoslovakia.

The upper house adopted a decree urging Babis to resign before the end of the kidnapping investigation into him on November 13.

While Babis has denied the allegations, noting that his son reported the alleged kidnapping because he suffered from a mental illness, opposition forces plan to raise the issue in a lower house session next week.

The Czech prime minister lost his immunity in January in a case where he is suspected of separating a company from the agricultural giant Agrofert for receiving some 2 million euros ($2.2 million) in EU subsidies before returning the firm back into the conglomerate. Babis repeatedly denied the fraud allegations, stating the case was politically motivated.