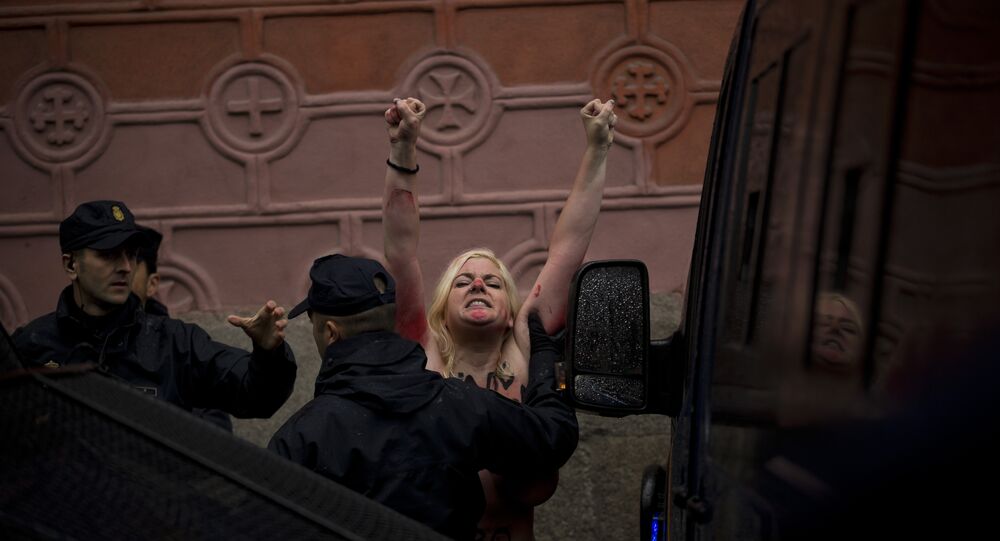 The ladies unleashed their anger and bared their breasts at a pro-choice protest at a Catholic church after the then-ruling party pushed through a bill that sought to restrict abortion rights.

Two members of Femen, who had chained themselves to an altar at Almudena Cathedral in June 2014 with their torsos reading 'freedom to abort', attended a court hearing in Madrid on Friday, according to Spanish daily El Periódico.

They are facing a prison sentence of up to nine months for offending religious sensibilities. The Christian Lawyers Association had earlier requested a two-year jail term, claiming that their stunt incited religious hatred.

The activists told the court that they did not mean to insult anyone's religious convictions, claiming their intention was to stir up public debate on the decriminalisation of abortion.

"We respect the crosses, the problem is when they want to throw the crosses at our ovaries. We have the right to express ourselves, don't we?" Femen's Spanish chapter said.

The group claimed that the activists were "defending women's rights and abortion rights" and called for their acquittal, as well as for the decriminalisation of ‘religious crimes' that still exist according to the country's criminal code.

Mariano Rajoy, who served as Spanish Prime Minister in 2011-2018, promised during his election campaign to reform the country's law so that abortion would be limited only to cases of rape or where there was a grave risk to the mother's health.

One of the most controversial elements of the bill was that 16 and 17-year-old girls would have to seek their parents' permission to have an abortion. However, his legislative push drew harsh criticism from pro-abortion campaigners, and Rajoy was forced to scrap his plans.