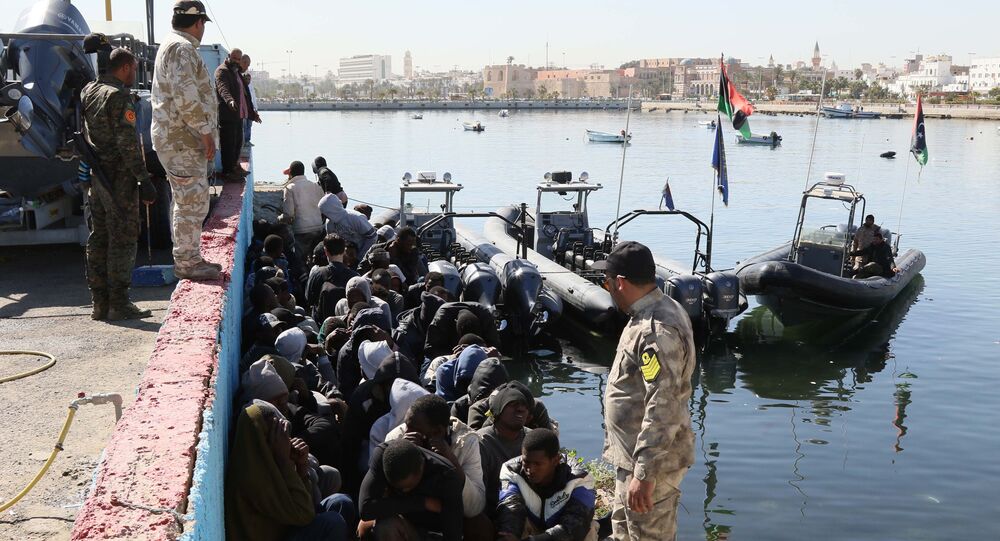 The North African country has been wracked with instability since the 2011 civil war and NATO military intervention, which left the country's leader Muammar Gaddafi dead and the country divided into several warring factions.

Fayez al-Sarraj, the head of the western Libya-based Government of National Accord (GNA), has lambasted European leaders for their "hypocrisy" on the migrant question and called for more intensive cooperation.

"I see so much hypocrisy in European demands toward our country. You are asking us to hold over 600,000 migrants inside our borders, of which only 30,000 are in official refugee camps. But you yourselves, who are infinitely richer than us, refuse to accept even one," the prime minister said, speaking to Italy's Corriere della Sera newspaper in an interview published Thursday.

"I would like more cooperation," al-Sarraj stressed, warning that Daesh (ISIS)* could seep into the ranks of would-be migrants and try to infiltrate Europe. "Our law enforcement agencies and intelligence services must work together if we want to avoid the worst," the prime minister said.

The GNA head also praised Rome's recent efforts on the Libyan issue, and called the international conference on Libyan peace in Palermo earlier this week a "real success," despite the fact that Marshal Khalifa Haftar, the commander of the Libyan National Army of the Tobruk-led government, which now controls the majority of Libya's territory, nearly boycotted the event.

© REUTERS / Guglielmo Mangiapane
'Good Photo Op': Despite UN Hype, Palermo Summit on Libya Achieves Little
Libya has been in a state of turmoil since 2011, when a NATO-backed civil uprising led to civil war and the overthrow of longtime Libyan leader Muammar Gaddafi. The eastern part of the country is governed by the Tobruk-based government, backed by Haftar's Libyan National Army. The GNA governs territories in the west of the country and is headquartered in Tripoli. A number of militia groups, human smugglers, and terrorists including Daesh are also known to operate in Libya.

Italy and France face tensions over the Libya issue. In September, Italian Deputy Prime Minister Matteo Salvini blamed former French President Nicolas Sarkozy for unleashing the war in Libya, and accused President Emmanuel Macron of adding fuel to the fire. Salvini, who also serves as Italy's interior minister, has taken a hardline stance, refusing to accept migrant boats arriving from Libya at Italian ports, and has promised to work with Libyan authorities to stop the migrant flow, including through the beefing up the Libyan coast guard.

Scholar: Libya is Too Divided, National Election by Mid-2019 "Is Impossible"