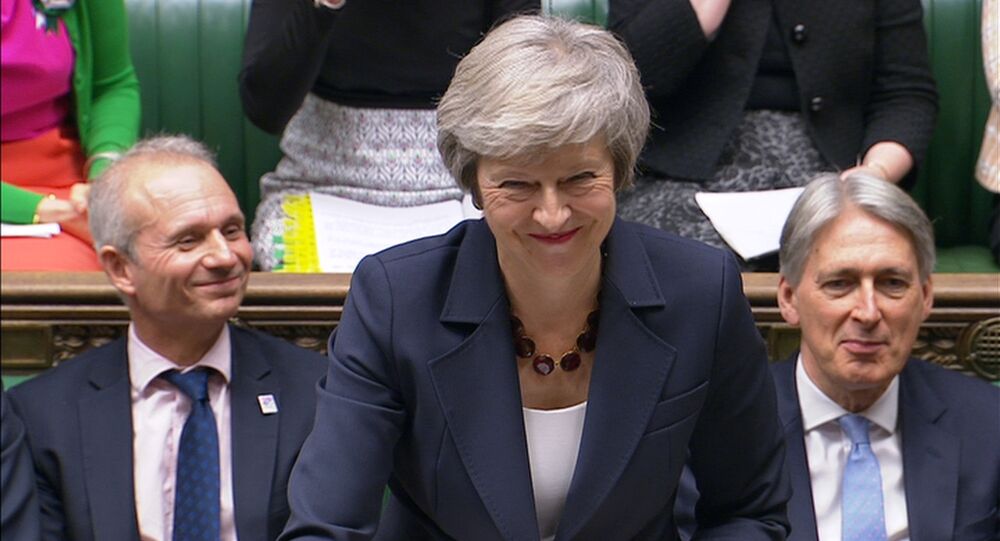 Critics from within the UK's coalition government, Parliament and her own part lined up after Theresa May announced that she had cabinet approval of the draft of the Brexit deal.

May said the Cabinet ministers took a “collective” decision to support her and press ahead with the deal with the EU, the Guardian reported.

“This is a decision that was not taken lightly, but I believe it is firmly in the national interest,” May said, adding that the UK cabinet had held “a long, detailed and impassioned debate”.

However, up to 11 Cabinet ministers supporting Brexit spoken out against the draft accord, the Express reported. Cabinet sources told The Guardian that one of them, Work and Pensions Secretary Esther McVey, made the most impassioned arguments against the draft agreement, but was ultimately “shouted down”.

May also faced a showdown with Arlene Foster, leader of the Democratic Unionist Party (DUP), which is in the coalition government with May’s own Conservative party, over the potential impact of the deal on Northern Ireland. The draft deal outlined that the UK will not be able to unilaterally exit the Irish backstop. Instead, that decision would rest with a joint, independent arbitration committee with an equal number of British and EU representatives, as well as outside members, which had enraged Brexiters, both within the DUP and Tory Party.

“Of course there will be consequences. We could not as Unionists support a deal that broke up the United Kingdom,” Foster said of the deal. Another DUP member, East Antrim MP Sammy Wilson noticed that May made “a deal she (May) said she would never accept,” the BBC reported.

© CC0 / Number 10
May’s Brexit Deal ‘Takes the Pressure Off,’ But Parliamentary Hurdles Remain
The backstop within the agreed-upon draft is planned to avoid a return to a "hard border" with the Irish Republic by keeping the UK as a whole aligned with the EU customs union for a limited time. EU chief negotiator Michel Barnier said agreement on the backstop would protect the Good Friday Agreement and respect the integrity of the UK as a whole, noting that it would only kick in if there was no better solution by the end of the transition period in 2020 and is “not meant to be used”.

Leading Conservative Brexiters also remain critical of May’s solution for Brexit. Jacob Rees-Mogg, the chair of the ardently pro-Brexit European Research Group, wrote to his party colleagues within minutes after the deal was published, urging them to join him in voting it down. Steve Baker, the former Brexit Minister, predicted that the deal was l "like a bad budget, will be in bits in a couple of days."

A colleague tells me,

“This is far worse than I feared. I feel very badly let down.”

I predict this deal, like a bad budget, will be in bits in a couple of days

Nicola Sturgeon, First Minister of Scotland said that proposed deal would be “devastating” for Scotland, pledging her party would oppose it during the Parliamentary hearings.

“It is obvious that the Prime Minister can barely unite her Cabinet on this deal and it is also increasingly clear that she will struggle to get a majority for it in Parliament. In these circumstances, it is more important than ever that we are not faced with a false choice between a bad deal and no deal. No-one should be effectively blackmailed into a choice between the frying pan or the fire,” she said, as cited by The Guardian.

London and Brussels have been engaged in Brexit talks since June 2017, reaching a draft agreement less than a month before the EU special summit. However, the accord still needs to be approved by the UK lawmakers and the EU Parliament.