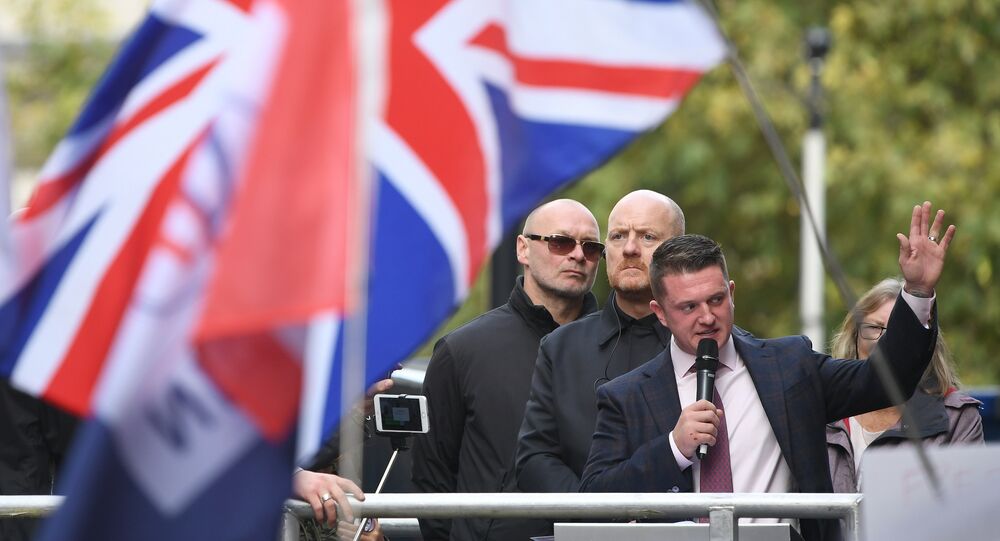 Tommy Robinson Fails to Get US Visa in Time, Meeting With GOP in Question

The British right-wing activist was released on bail recently after serving time for violating court reporting rules. During his incarceration, several US politicians voiced their support for Robinson, urging UK authorities to treat him fairly.

British independent journalist and political activist Tommy Robinson has failed to get a US visa soon enough to allow him to arrive in time for an event organised by the Philadelphia-based Middle East Forum, where he was expected to meet seven GOP members from the US House of Representatives.

Daniel Pipes, the president of the forum, said that the activist now realized it "will take a while" for him to a get a US visa. Pipes noted that it was still possible for Robinson to get a US visa, but at a later date. The US State Department declined to comment on Robinson's application.

Several dozen UK members of parliament had recently asked US Secretary of State Mike Pompeo to deny Robinson a visa for fear that he could use the trip as a fund-raising tour for his activities. They warned that the activist could solicit as much as $1.4 million in political donations.

Robinson violated US immigration rules in the past. In 2012 he entered the country using another man's passport, and after staying one night, returned using his own. This didn't go unnoticed by the authorities, and he was later jailed for 10 months for his misdemeanour.

Tommy Robinson is known for his active campaigning against illegal immigration in the UK. He was jailed in May and released on bail only in November after violating court reporting rules; he'd revealed to the British public that 20 men being tried for participating in a gang rape were Muslims. During his incarceration, several US politicians and officials sounded their support for the activist.