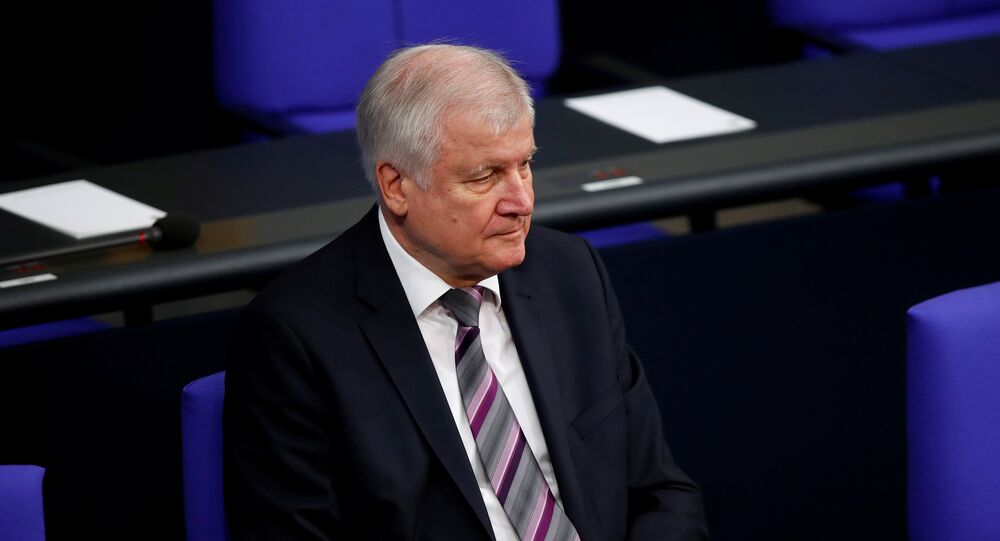 Seehofer Plans to Keep Position as Interior Min. After Stepping Down as CSU Head

Horst Seehofer confirmed on Monday his intention to keep the position of German interior minister even after leaving the Christian Social Union, which he is currently the head of.

"My position of the head of the Ministry of Internal Affairs… will be kept, I have no reason to make statements on this issue," said Seehofer at a press conference in Saxony.

He specified that the deadlines for his leaving the Christian Social Union would be announced later.

"I am leaving the post of chairman of the Christian Social Union, it has been decided. There are still some discussions on the deadlines, the timeframes will be announced this week," Seehofer told reporters.

The statement was made after on Sunday Seehofer also told senior CSU members at a meeting that he wanted to resign as interior minister before the end of the current legislative period in 2021, Reuters reported, citing sources familiar with the matter.

© AP Photo / Markus Schreiber
'Example of How to Take Responsibility': CDU Party Leader Urges Seehofer to Step Down After Merkel
Over 60 percent of the Germans believe that Horst Seehofer should leave the posts of the country's interior minister and the leader of CSU in light of the party's recent poor performance in Bavaria's election, Forsa Institute's poll commissioned by the RTL/n-tv broadcasters showed in October.

According to the poll, as many as 64 percent of Germans supported the idea of Seehofer's stepping down, while in Bavaria itself the minister's resignation was desired by 62 percent of respondents. In addition, 67 percent of CSU supporters in Bavaria said Seehofer's dismissal was necessary, the poll found.

Germany has been one of the EU states which have accepted the largest number of people since Europe's migration crisis erupted in 2015. Merkel's open-door policy, which resulted in hundreds of thousands of people pouring into the country from the Middle East and North Africa, has prompted criticism from those claiming that the security situation in the country has worsened due to the influx of migrants.

© AP Photo / Jens Meyer
Horst Seehofer Says Would Have Joined Chemnitz Protests if Was Not Minister
On September 6, Seehofer expressed his understanding for violent anti-migrant protests in the city of Chemnitz and said that the migration issue was the root of all political problems in the country. The Chemnitz rallies were sparked by the murder of a German citizen on August 26, allegedly at the hands of two migrants from Iraq and Syria, who have since been arrested. Around 18 people have been injured and hundreds have been reportedly detained.

Several German migrant communities, as well as pro-migrant and anti-racism charities, have sent an open letter to the German Interior Minister Horst Seehofer demanding to resign after his controversial comments on the migration issue.

The news about Seehofer's possible resignation comes after Merkel announced last week that she would not run for party leader in December or seek a fifth term as chancellor in 2021, setting a deadline for her exit from German politics.

READ MORE: 'Both Merkel and Seehofer are Balancing on a Knife's Edge' — Analyst

Merkel's announcement came shortly after the CDU suffered a setback in a state vote in Hesse, while its Bavarian sister party sustained its biggest loss in half a century in last month's election to the regional parliament.