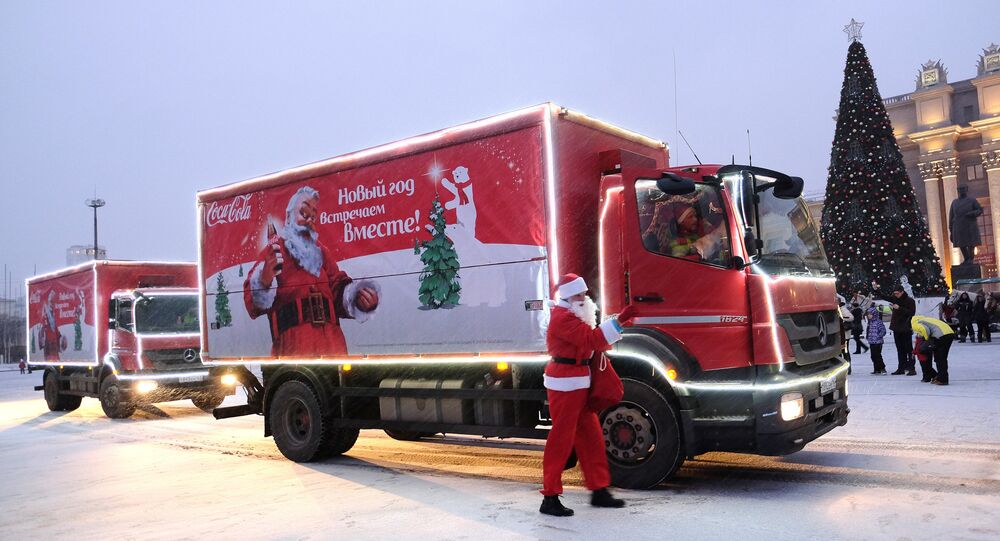 Adorned with a SANTA 1 number plate and a set of lights along its perimeter, the truck, which featured in the famed Holidays Are Coming commercial, has already hit the road on the threshold of the nearly two-month-long Christmas season.

The iconic Coca-Cola truck, which has toured the UK and beyond for the last eight years, is due to stop in the town of Exeter on November 11, and the schedule prompted local MP Ben Bradshaw to demand “a break” from what he referred to as "rampant pre-Christmas commercialism" on Armistice Day.

By way of excuse, the firm asserted that the annual distribution of festive cans of Coke from the red and brightly-lit trailer would kick off at least an hour after the traditional two-minute silence at 11 a.m. GMT. Many Twitter users, however, turned a deaf ear to the argument, supporting the MP’s opinion that mixing together the two occasions is way too “disrespectful:”

They could give it a rest for one day.
BBC News — Remembrance Day: Coca-Cola truck Exeter visit criticised https://t.co/Fy9ki23Pyh

One notably reiterated calls for the country to come to a grinding halt, at least once a year, thus reserving the day as “a special one of remembrance.”

Others went a bit further, proceeding to speculate on the much debated harmful effects of Coca-Cola’s soft drinks:

"Rum and Coca Cola working for the Yankee Dollar," one chimed in tongue-in-cheek, with another elaborating on health issues pensioners and kids will potentially have at the hands of the iconic soft drink manufacturer after such large-scale promo events. Coca-Cola’s produce is a subject of discussion in its own right:

BBC News — Remembrance Day: Coca-Cola truck Exeter visit criticised https://t.co/lRayhiCezJ Coca-Cola would Never let such an occasion get in the way of Profit — The truck would mow down Kids and Pensioners if it increased sales. Coca-Cola is another word for Gut Cancer.

Others, meanwhile, called attention to the timing, noting that there is nothing wrong in starting the fizzy drink event after the two-minute silence is over. One even suggested the MP's annoying comments take the biscuit:

Remembrance Day: Coca-Cola truck Exeter visit criticised — BBC News — #wtf has #CocaCola got to do with Remembrance Day? Bad enough they try and make out they’ve got some link to Christmas, but this one takes the biscuit https://t.co/jW2DxjYmhO

Two years ago, Coca Cola products were used to set up a giant wall for Remembrance Day at a Safeway store in Prince Albert, Canada. Being “a proud son” of a Second World War veteran, store owner Wes Erlendson said Remembrance Day meant a lot to him, noting 1,148 cans of Coke, Diet Coke, Coke Zero and Sprite went for spelling out “lest we forget” on the supermarket wall.

This Sunday, various memorial and remembrance services are taking place all across Europe, including in the British city of Exeter, with a wreath-laying at the County War Memorial and a cathedral service.

Red Poppy is Not About Remembrance, It Has Become a Symbol of Militarism