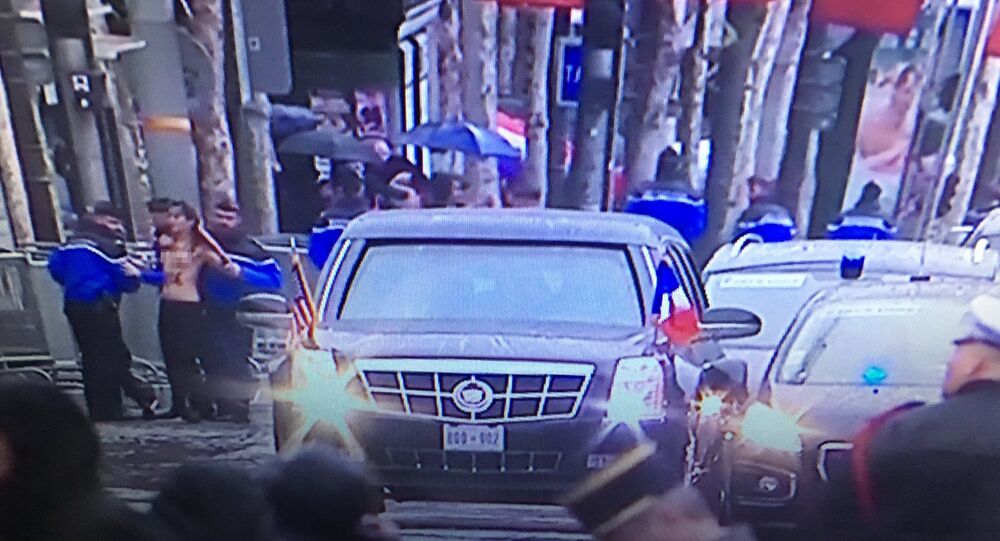 On Saturday, three Femen activists were arrested after holding a nude protest at the Arc de Triomphe in Paris, carrying banners which read "Welcome war criminals."

Two topless activists from the notorious Femen movement were detained by French police after approaching US President Donald Trump's motorcade along the Champs Elysees in Paris amid events marking the 100th anniversary of the end of World War I.

The protesters came within a few metres of the cortege, screaming indistinctly shortly after French media reported that about 2,000 police officers had been deployed to ensure security at the Champs Elysee celebrations.

Topless protestor runs toward #Trump motorcade on the Champs d’elysee before Armistice Day. Most likely from Femen pic.twitter.com/fyL1UGpEHb

The incident comes just a day after three Femen activists showed up under the Arc de Triomphe to protest against "war criminals."

Twitter/@femeninna
Topless Femen Activists Protest Against "War Criminals" in Paris (PHOTOS)
Standing at the WWI commemoration site, the sextremists flashed their breasts, with the words "Fake Protestants/Real Dictators" written on their chests.

In a parallel development, world leaders are arriving at the Arc de Triomphe for an official ceremony to commemorate the centennial anniversary of the armistice that ceased fighting during World War I.

Femen is a feminist group that has gained notoriety for organising topless protests across the globe.