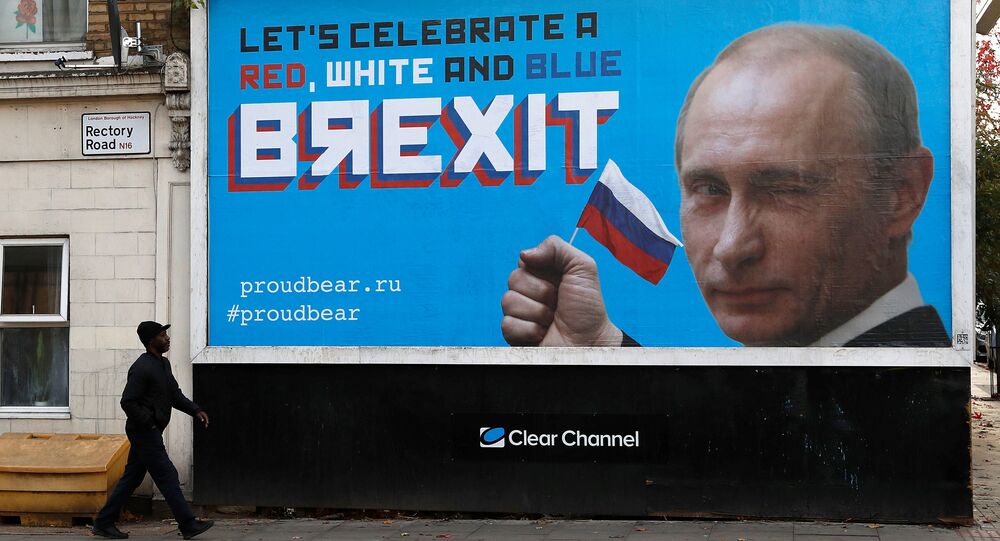 From Яussia With Love: Putin Billboards Put Up in London to Celebrate BЯEXIT

A bunch of tongue-in-cheek billboards are intended to "celebrate" Russia's role in Brexit as some Kremlin critics have questioned whether Russia has meddled in the 2016 vote on leaving the European Union.

Proud Bear, a group of activists who mockingly call themselves a unit of "Russian GRU officers," have adorned London with Vladimir Putin billboards and BЯEXIT slogans.

The group announced their latest stunt on its Twitter page, saying that they were celebrating Britain's looming departure from the European Union.

#PROUDBEAR officers from POSTER SPETSNAZ division deployed ACROSS London to start celebration of #Brexit COLLABORATION. People of UNITED BRITAIN, many more for you to find! 🕵️‍♂️ pic.twitter.com/yqpz687QIx

Proud Bear shared images of three billboards erected in London. The first two slogans feature a winking Vladimir Putin; the first one reads, "Let's celebrate a red, white and blue Brexit" (a reference to the Russian tricolour), while the second one says, "Brexit means BЯEXIT" (the "R" in "Brexit" is intentionally replaced by the Russian letter «Я», /ya/).

READ MORE: The History of US Government Meddling, 'I Can't Be Racist, My Husband is Black!'

The third billboard, also deliberately misspelled with Russian letters, reads "THAИK YOU! BOЯIS," and sports a photo of former UK Foreign Secretary Boris Johnson, a vocal Russia critic and a high-profile Brexiteer, waving Russian flags while stranded on a zip wire (a reference to his real-life failed zip wire jump during the London 2012 Olympic celebrations).

According to Proud Bear's webpage, the group's mission (affecting a parodic Russian inflection) is to "help people of England make freedom from the European Union and democracy voting." They are now raising money to pay for "the biggest screen billboard in soon-to-be-not-Europe" at London Waterloo station to celebrate Brexit.

In June 2016, Britain had a divisive referendum on whether to pull out of the European Union, with 51.9 percent supporting the move. Now, the UK is slated to leave the bloc in late March 2019 and is negotiating exit terms with Brussels.

After the referendum, several Remainers, including MPS, accused Russia of secretly backing the pro-Brexit vote. Their concerns were echoed by members of the US Congress, who asked the Director of National Intelligence for information about possible Russian meddling.

However, the UK government has failed to give any evidence of foreign interference in the Brexit vote.