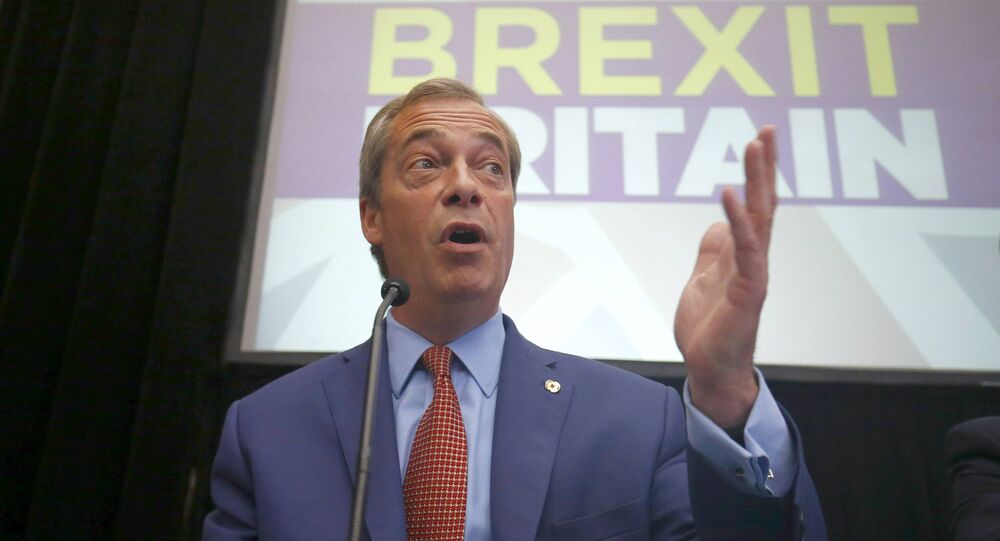 In 2016, Nigel Farage stood down as leader of the UK Independent Party (UKIP) following the electorate vote to withdraw Britain from the EU. Even so, he continues to represent the UKIP in the European Parliament and regularly comments on the EU and Brexit process-related issues.

"Thanks for the compliment," Farage tweeted, responding to Barnier's remarks.

Shortly after, Farage called himself the "devil for the EU", claiming that the bloc's leaders are "really scared" of the European Parliament elections scheduled for next year.

READ MORE: Former UKIP Leader Farage Urges Salvini 'Not to Give in' to EU 'Gangsters'

"What Barnier knows is on the right, on the centre, and on the left, there is going to be a huge influx of new MEPs (member of European Parliament) into that parliament that completely reject the model that they should be governed by unelected old men like him," Farage pointed out.

His comments came after Michel Barnier addressed a conference of the centre-right European People's Party (EPP) to call for "a strong Europe that speaks in one and the same voice" and launch an attack on "populist deceit" across the continent.

"The European project is fragile, it is under threat, it is perishable and at the same time it is vital. We all have to fight against those who want to demolish Europe with their fear, their populist deceit, their attacks against the European project. There is now a Farage in every country," Barnier said.

READ MORE: Brexit Could Be Extended by Another Year — EU Negotiator Michel Barnier

Earlier, Barnier, a former vice-president of the EPP, ruled out that he would run as the party's lead candidate in the European Parliament elections slated for May 2019. He pointed out that he wants to see "my Brexit mission to the end".

Despite standing down as UKIP leader, Farage continues to serve as an MEP, and has been an outspoken critic of the government’s handling of Brexit talks.

© AP Photo / Lefteris Pitarakis
Ex-UKIP Leader Nigel Farage ‘Thinking About’ Running for London Mayor in 2020
Speaking on LBC Radio in late October, Farage said that he believes that UK Prime Minister Theresa May will ultimately secure a Brexit deal even less favourable than the Chequers plan, claiming that it will be "much worse than any of the Eurosceptics feared."

Presented by May in July, the Chequers plan aims to create a UK-EU free trade area, based on a "common rulebook" which will see both parties implement the same standards on goods and which would spare the need for customs and regulatory border checks.

According to the plan, any Brexit agreement would have to provide frictionless trade across the Northern Irish border.