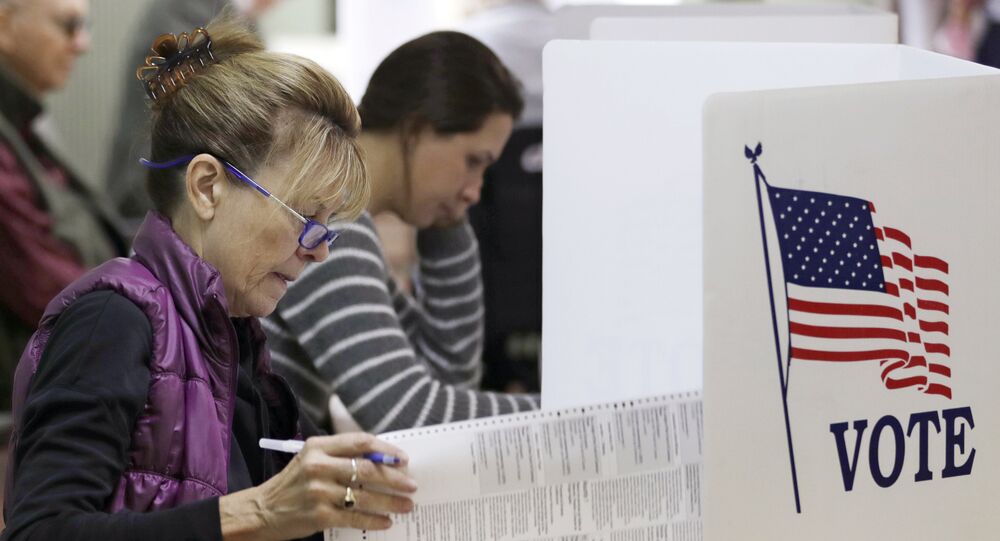 As soon as the results of the US election were tallied, European politicians shared their views on the shift of power balance in the US Congress. While some voiced caution regarding international relations, others hastened to side with Democrats and cheered the “Blue” taking control of the House of Representatives.

Despite the Democratic Party flipping 34 seats to take control of the House of Representatives while Republicans kept a majority in the Senate, Donald Trump praised his allies on Twitter and told his followers about lots of congratulations from “foreign friends.”

​Although Trump didn’t name those sending celebratory messages his way, a reaction from leading politicians is visible online and in the media.

Italy’s Deputy Prime Minister and leader of the right-wing League party Matteo Salvini was the one who voiced his delight about Trump’s advances.
"Congratulations to President Trump for the seats he won at the Senate and those he held in crucial states against everyone: left-wing journalists, actors, singers, directors, and pseudo-intellectuals," he said.

Germany’s Foreign Minister Haiko Maas was more reserved. He stated that the new situation in the US Congress does not alter the changes in trans-Atlantic relations.

"We must remain realistic. In the past two years, the balance in the partnership with the United States has shifted for the foreseeable future, and the election won't change anything about that either," he said.

He emphasised that it would be a mistake to expect a course correction from Donald Trump now.

​“The case is that the US remains our most important partner outside Europe. To maintain this partnership, we need to rethink and align our relations with the US,” he tweeted, emphasizing that one can respond to the “America First” policy only with “Europe United” concept.

He also pointed out that the winners of the 2018 Midterm vote, especially among the Democrats, are “more diverse, younger, more female.” According to Maas, in this way, many voters confirmed a pioneering role, their country still fights for diversity and freedom and will do so in the future.

​The European Unions deputy chief executive, Frans Timmermans, echoed these statements, praising those who chose “inclusion over racism.” He also took the opportunity to voice his ambitions for the upcoming elections to the European Parliament, scheduled for spring 2019.

Inspired by voters in the US who chose hope over fear, civility over rudeness, inclusion over racism, equality over discrimination. They stood up for their values. And so will we.

"The Democrats win the House of Representatives for the first time in eight years despite powerful Republican gerrymandering. Donald Trump is right: 'Tremendous success tonight,'” he tweeted.

Democrats could use the possibility of impeachment as leverage, Damien Lempereur, the spokesman of the Debout La France party, told Sputnik. However, he does not think that the results of the US midterms are going to impact US relations to France.

Austrian lawmaker and OSCE Parliamentary Assembly observer at the US midterm elections Roman Haider shares this view. He believes that Trump is unlikely to bow to the opposition-held House.

"Don't expect any change to policies as Republicans could keep the Senate and the President is not the type of person that lets himself be influenced by any majority in the Representatives House," Haider told Sputnik.

With China having been entangled in an escalating trade row with the US since April, Foreign Ministry spokesperson Hua Chunying declined to speak directly about the voting results and cited the risk of being accused of interfering in the midterm vote.  However, she stated that "regardless of the result… we believe the two governments and the two peoples all want to maintain the sound and steady development of bilateral relations because we believe it is in the best interests of the international community."

Japan, whose alliance with the US has also been overshadowed by the higher tariffs Trump imposed on steel and aluminium, dismissed an idea of any compromise on the issue against its national interest even if a political climate in the US changes. However, the country's deputy chief cabinet secretary Yasutoshi Nishimura said that Japan-US alliance is "unwavering", despite mixed election results for Trump.

In Israel, where Trump won support for his decision to recognize Jerusalem as the Jewish state’s capital, Deputy Minister for Public Diplomacy Michael Oren described the Midterm outcome as an opportunity to re-connect with Democrats and liberal Jews who may have not shared Tel-Aviv’s sentiment towards Trump. He also claimed that the vote would prompt Israel to try to use the time while Trump still holds the office in the White House to solve its chief concerns, including Iran, Syria and the Palestinian situation.