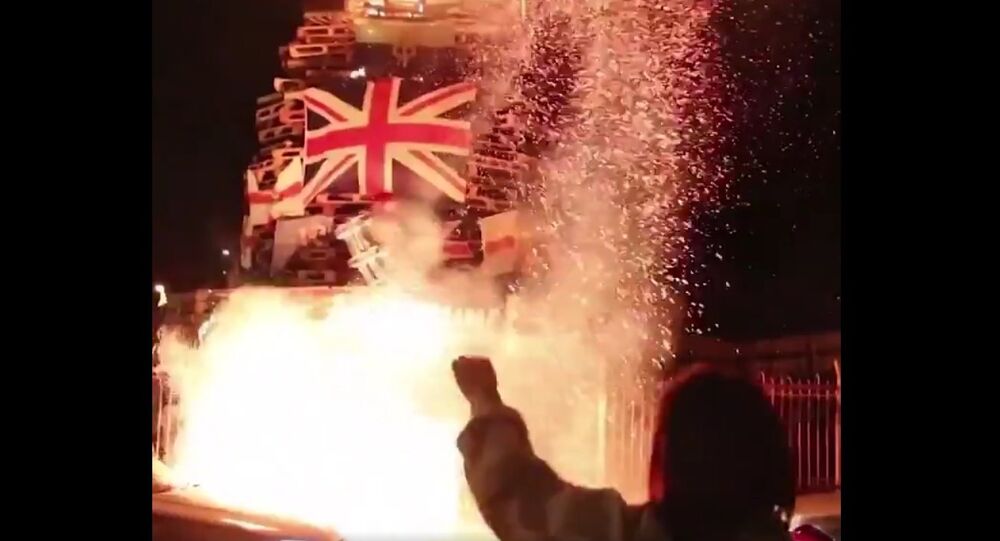 Incensed patriotic Brits have hit back at the organisers of a bonfire display in Leeds, Yorkshire after a Union Jack was set on fire at the conclusion of the event.

The flag was placed on top of a Guy Fawkes effigy at the apex of a large bonfire at the Thorner Bonfire & Fireworks Festival on the evening of November 3 — a number of outraged spectators opted to desert the display in disgust as a result.

An anonymous woman quoted in local media said attendees could be heard saying "what are they going to do with the flag?" as the Union Jack was unceremoniously hoisted onto the pyre.

"We just watched it burn for a bit and my parents were disgusted. Well, it wasn't burning, more melting with the fabric, and we just turned around and walked out. As we were walking out people were saying 'aren't they taking the flag down it?' It was terrible," she said.

Residents of Thorner near Leeds have expressed their disgust this evening after the annual Village Hall bonfire saw the burning of the Union Jack.

​Similar righteous indignation was exhibited by some social media users, who took to Twitter to vent their incendiary ire.

the organisers should have been burned on the bonfire —traitors — Outraged families walk out as Union Jack is burned at Leeds bonfire display https://t.co/4TSXB4cpvz

ANGRY IS NOT THE WORD. WTH IS WRONG WITH THESE PEOPLE. 😡
Outrage as Union Jack is burnt at Leeds bonfire display.https://t.co/JN3rrfYq5H

​​Nonetheless, the event's organizers have stood by their destructive decision.

"[The fallout] has all been dealt with. The Union Jack was damaged and it is perfectly suitable to burn a damaged Union Jack," a spokesperson said.

Contrary to popular myth, it's not illegal to burn the UK's national emblem — and the spokesperson was correct to say cremation is a legitimate means of dispensing with a damaged Union Jack. The British Flag Institute's suggested recipe for dispensing with a flag when it's no longer in a suitable condition for use is for them to be "destroyed in a dignified way", such as being burnt or cut into strips.

Ankara Condemns Burning of Turkish Flag During Demonstration in Athens

Guess Who Else Tried to Criminalize Flag Burning....