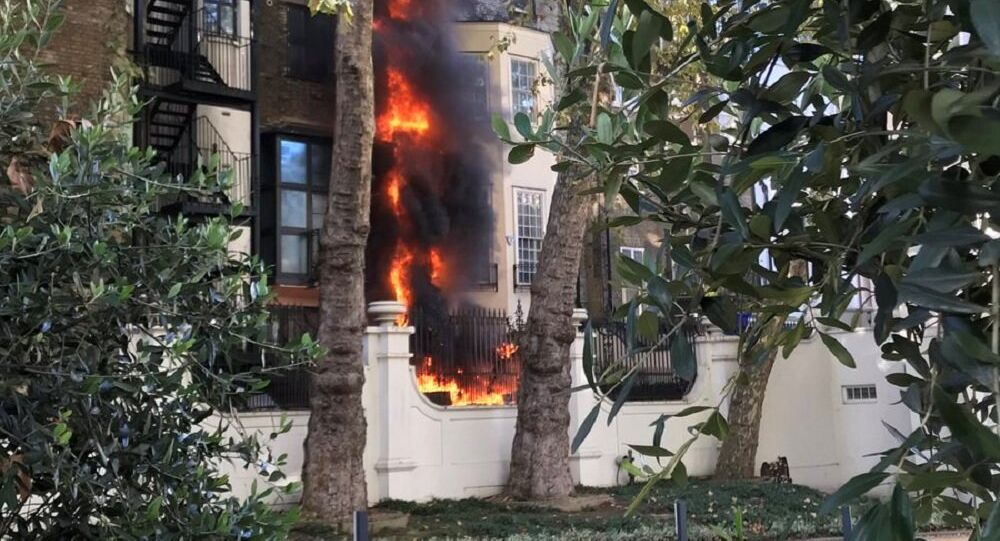 Nearly forty firefighters have responded to a major blaze near the Saudi embassy in Central London.

Images on social media reveal first responders attending an inferno engulfing a terraced building near the embassy in Mayfair.

The fire reportedly started in a Lebanese restaurant on the ground floor before spreading to the third, with eyewitnesses hearing explosions. However, authorities have not confirmed the reports and the fire has not spread to the Saudi embassy.

Fire raging in building next door to #Saudi embassy in London pic.twitter.com/S6Lv87Sf86

© AFP 2021 / Daniel LEAL-OLIVAS
Armed police stand by as firefighters are seen responding to a fire at the building next door to the Embassy of Saudi Arabia in London on November 2, 2018

"Six fire engines and around 40 firefighters have been called to a fire at a restaurant with flats above in Curzon Street in Mayfair," a statement said, adding that the "restaurants extraction system from ground to third floor is alight.

​The cause of the fire was unknown, the LFB stated and fire crews from Lambeth, Soho, Chelsea and others brought the blaze under control by 10:47.

WATCH: Fire Erupts in Derelict Building in Center of Moscow