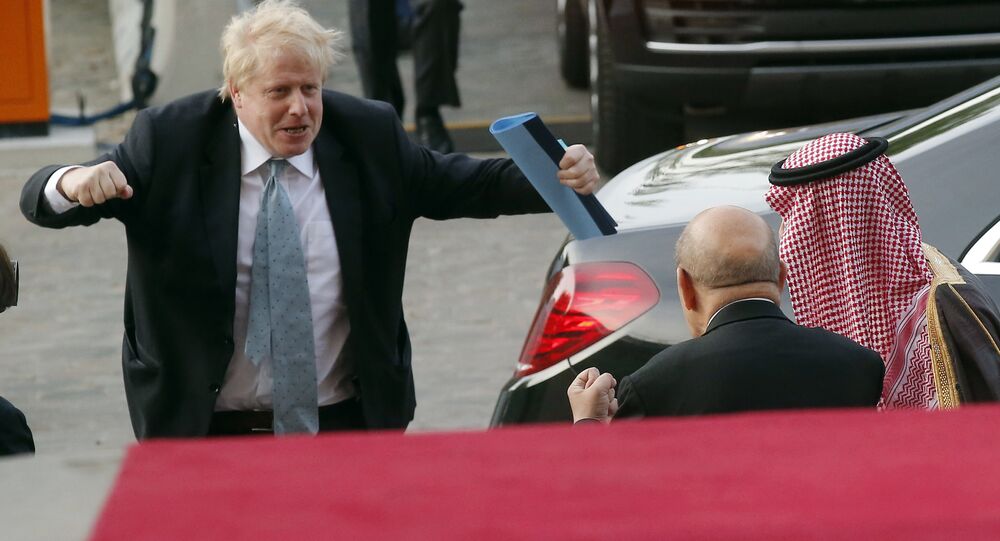 Jet-Set to Jeddah: BoJo Condemns Saudis Who Paid £14,000 for His Visit

A register of MPs' financial interests prepared on Wednesday revealed that Mr. Johnson flew to Jeddah from 19 to 21 September, with the Saudi government footing the bill.

Johnson has yet to reveal who paid for the trip, despite writing a lengthy Telegraph column condemning Khashoggi's murder last week.

Khashoggi, known for his criticism of Saudi policies, had been working as a columnist for The Washington Post. The journalist was last seen entering the Saudi consulate in Istanbul on October 2. On October 19, Saudi Arabia admitted the journalist had died during a fight inside the consulate. Riyadh said 18 people had been arrested over their suspected involvement in the incident.

"There can be no suggestion of a stitch-up, or of denying justice to Mr Khashoggi and his family out of deference to Saudi sensibilities," Mr. Johnson said in his column.

© Flickr / Crawford Learmonth
Big Scare: Saudi Authorities Raid Halloween Bash in Riyadh, Arrest 19 Foreign Women (PHOTOS, VIDEOS)
He added that UK authorities "should prepare to sanction those involved in carrying out or authorising the brutal killing of this journalist, not least since journalists are now being killed around the world at an unprecedented rate."

However, Mr. Johnson has been an avid supporter of Saudi ruler Mohammad bin Salman and lauded his achievements in a Telegraph column in February, calling the crown prince a "reformer" and praising his "social and economic renewal of Saudi Arabia" via the Vision 2030 program.

A close source to the Uxbridge MP told the Sun that Mr. Johnson had "visited Saudi Arabia to discuss his long-standing campaign of improving education for women and girls".

The register also disclosed a £50,000 donation that Mr. Johnson received from contentious hedge-fund founder Jon Wood, which he used to pay office and staffing expenses.

Of course, Twitter had plenty to say about the revelations, with both BoJo critics and enthusiasts alike commenting on his recent getaway to the Saudi coast.

Boris Johnson took a £14,000 trip to Saudi Arabia just days before the murder of journalist, Jamal Khashoggi. It goes without saying, it was all expenses paid by the Saudi’s. This sort of thing has to stop. Access to power in Britain shouldn’t be for sale at any price, to anyone.

This story is silly@BorisJohnson’s trip was before the murder (which no one could’ve predicted); was clearly a noble purpose (he has long been a supporter of education of women); & has been transparent about it, even writing about it in his column https://t.co/RL0ZW4x4hs

​He slept with Cole’s wife / gf (can’t remember which) so now it is time for revenge.

Should be a joke but it’s actually true. What a grotesque ruling class we subject ourselves to.

​How is the murder and BoJos £14,000 linked? Are you saying he knew the chap was going to be murdered? If not, then why imply there is a link?

I wonder how much money
Philip Mays company has invested in Saudi? Are you looking into that?

​Well #BorisJohnson literally called for the “decapitation” of Assad so I guess he found like minded people among the decapitators of #Khashoggi https://t.co/UB7bTJjUfi

​I find it rather a shame Blojo wasn't invited into a Saudi embassy.