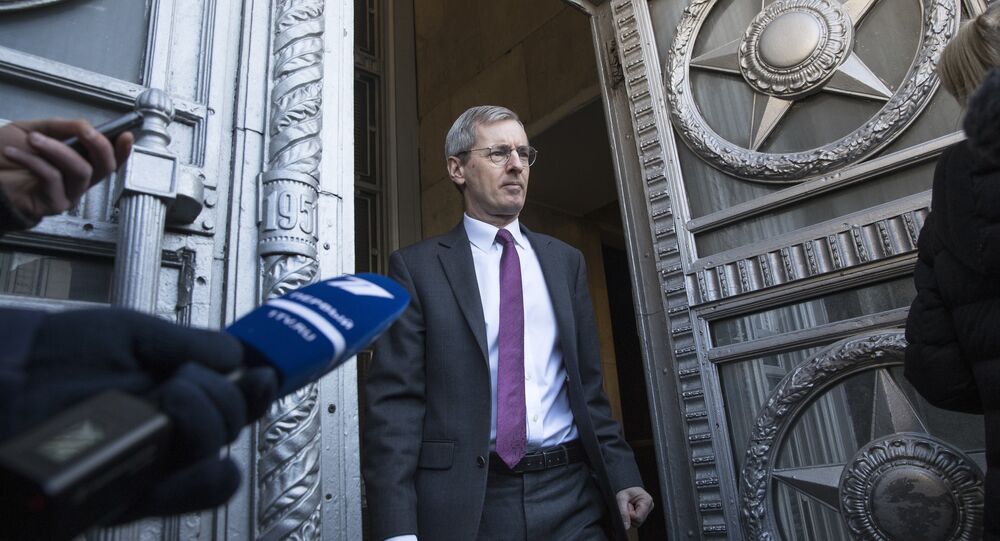 Earlier, the press officer of the Russian Embassy in London pointed out that the UK keeps replacing objective reality with "emotional calls" and "groundless accusations" as it tries to create an international anti-Russian alliance. The remarks came after UK Prime Minister Theresa May alleged that Russia was deploying chemical weapons in Britain.

The UK Ambassador in Russia Laurie Bristow has stated that London is not seeking confrontation with Russia, but that it would take a long time to restore bilateral relations.

"[UK] Prime Minister [Theresa] May made it very clear in parliament that we don't have to quarrel with Russia or the people of Russia. What we want is a relationship based on mutual respect that benefits the people of both countries," Bristow told the RussiaTALK investment forum in Moscow.

The statement came after the press officer of the Russian Embassy to the UK blamed London for replacing objective reality with "emotional calls" and "groundless accusations" as it tries to create an international anti-Russian alliance. The remarks came after UK Prime Minister Theresa May claimed that Russia was deploying chemical weapons in Britain.

"We strongly reject these insinuations. Another portion of accusations of Russia is a far cry from reality. We would like to stress that, as regards the Salisbury incident, we have to deal with a reckless position of the current British authorities," the press officer underscored.

Referring to former Russian intelligence officer Sergei Skripal and his daughter Yulia, the press officer accused London of being unwilling "to cooperate with Russia on the investigation of the poisoning of the two Russian nationals on British soil."

He added that the investigation into the Salisbury incident was carried out in a non-transparent way, slamming it as "an example of international law being ignored by the United Kingdom."

He blamed senior British officials for using the term "rules-based international order" in an attempt to create an impression that the UK was a "consistent supporter" of international law and could thus declare other states violators.

"In fact, this is an attempt to disguise the obvious and fundamental difference between the clearly fixed norms of international law agreed (upon) by the whole international community, and some obscure 'rules', which are popularized by the British and generally Western ruling circles," the press officer pointed out.

© AP Photo
The Skripal Case: Fifteen Facts and Some Logical Conclusions
In early September, UK investigators claimed that they had identified Russian nationals Alexander Petrov and Ruslan Boshirov as the suspected perpetrators of the attack on former Russian intelligence officer Sergei Skripal and his daughter Yulia that took place in the UK town of Salisbury on March 4.

Boshirov and Petrov, in turn, refuted any involvement in the Skripal case, stressing that they visited Salisbury as tourists and worked in the fitness industry.

British Prime Minister Theresa May accused the Russian military intelligence service of being behind the poisoning. Moscow denies the allegations, stressing that the whole case was falling apart due to a lack of evidence.