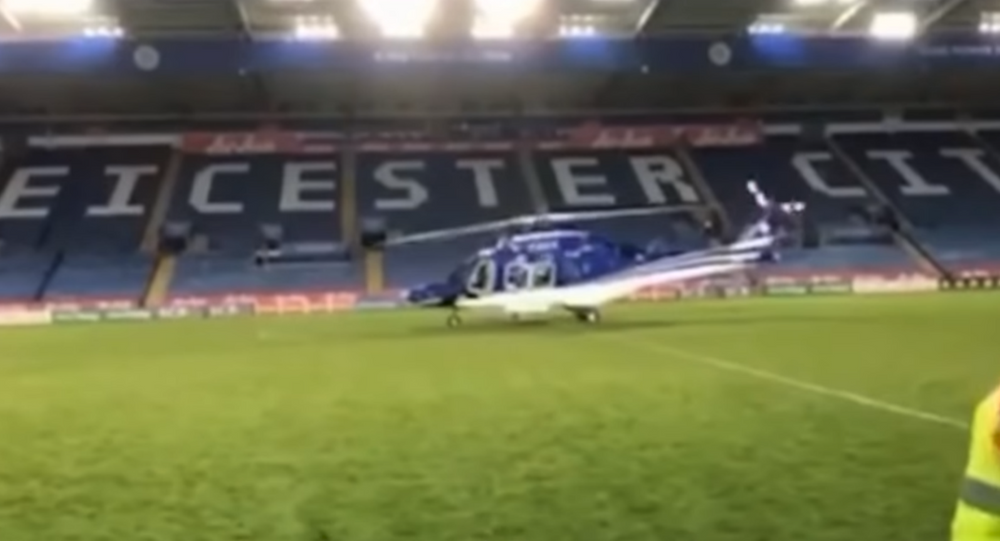 Vichai Srivaddhanaprabha, along with two members of his staff, the pilot and a fifth passenger, died on Saturday after the AgustaWestland AW169 chopper they were aboard lost control and ultimately crashed onto the parking lot outside the King Power Stadium in Leicester, UK.

The video, which was taken from inside the football club's stadium, shows the helicopter gaining altitude for nearly 50 seconds before disaster strikes, sending the aircraft into a downward spiral. The chopper completes four spins before disappearing behind the venue.

​Aviation expert David Learmount told Leicestershire Live that the chopper "appeared to be normal at take-off" before things went downhill as the pilot attempted to turn out of the stadium.

"At lift-off, you can't see anything that's abnormal, but it's an awkward job climbing out of a stadium because ideally you want some forward speed as well as continuing to climb," Learmount said. "The pilot climbed very nearly vertically until he was above the height of the stadium and then started to turn to the right — it was very shortly after that control was lost."

"Just after he did a maneuver that seemed to be intended, he lost control," he added.

Additional footage shot on the day of the crash shows the aircraft engulfed by flames.

​The UK's Air Accidents Investigation Branch (AAIB) released a statement on the incident on Monday, stating that officials from the agency's various divisions would be joining the case and that the helicopter's digital flight data recorder was retrieved from the crash site.

"Our inspectors in Farnborough will start working on the recorder, which was subject to intense heat as a result of the post-accident fire," the announcement reads, adding that officials will stay in the area for an additional week to gather as much evidence as possible.

AAIB investigators have not yet commented on the widely shared footage, telling the BBC that it was "too early" to do so. Leonardo SpA, the Italian company that manufactures the AW169, is working alongside officials to determine the cause of the crash.

In addition to floral memorials established outside of the Leicester stadium, players at all Premier League matches will be taking part in a minute's silence and wearing a black armband at this weekend's upcoming games. Fans of the football team have also been allowed to sign a book of condolences, which was opened to the public earlier this week.