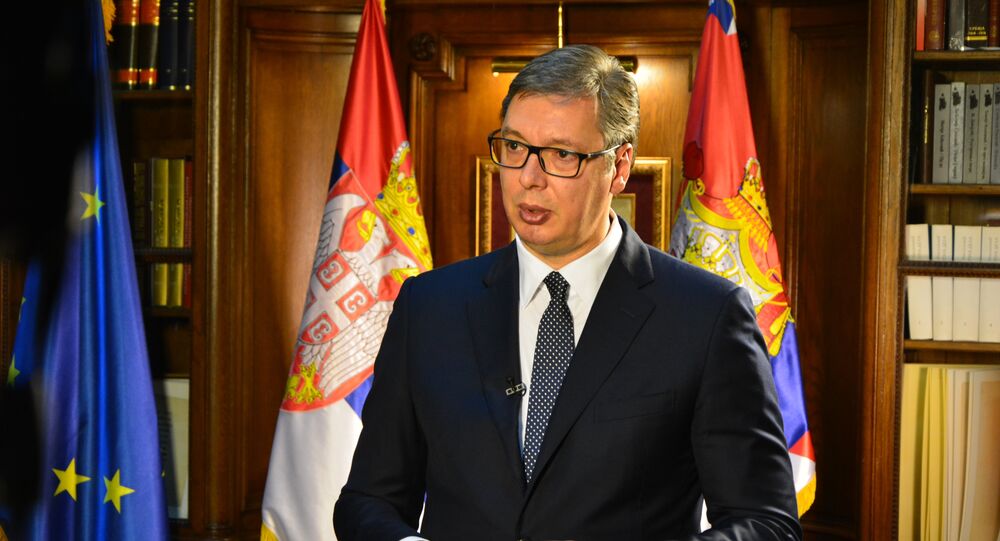 Serbian President Aleksandar Vucic has warned that there were several actions Kosovo's administration is planning to take next month which threaten to destroy any hope of a compromise settlement between Belgrade and Pristina.

Kosovo's administration has already made a decision to build a so-called Kosovo Army out of the Kosovo Security Force, with the new force, envisioned as a 'NATO-compatible army', to be established on November 28 on Albania's flag day as a 'gift to the Albanian nation', President Vucic said, speaking to Sputnik Serbia on Tuesday.

Belgrade has repeatedly condemned the US-backed Kosovo government's plans to create a 'Kosovo Army', saying it would violate the breakaway region's own constitution and the spirit of all agreements with Belgrade, as well as UN Security Council Resolution 1244 on a foreign military presence in the region, and other agreements.

© AFP 2021 / ARMEND NIMANI
'US Not Sure Whether They Are Ready to Back Kosovo Army Creation' – Analyst
According to Vucic, negotiations with Pristina will continue, and a range of topics is up for discussion for meetings set for Wednesday. However, Kosovo's authorities have also sought to artificially limit the scope of their delegation's work, he lamented.

"As you can see, they are completely disinclined toward doing anything on the issue of the Association of Serb Communities [i.e. the granting of autonomy rights to municipalities in Kosovo which have a predominantly ethnic Serb population]. It's clear that we will face more and more problems," Vucic said.

Pristina's bid to join Interpol is another problem, according to Vucic.

"This will create big problems for us and cause a lot of turmoil in terms of false accusations against Serbs and the further self-characterization of Kosovo as victims. This is an additional factor which can affect the atmosphere of future negotiations of all kinds, as well. It would be a signal to [Pristina] that they can do whatever they want. And I fear that we will enter a vicious circle without any chance of a happy ending, which in this case is compromise," the president explained.

According to the president, while he fears what awaits Serbia from Kosovo authorities next month, he also vows to "do everything in [his] power to preserve peace and help [his] people."

Kosovo unilaterally declared independence in 2008, with Serbia, Russia and many other countries refusing to recognize the breakaway republic. NATO bombed Yugoslavia in 1999 during an armed confrontation between Muslim Albanian separatists and Serbian army and police forces in Kosovo, justifying the strikes by accusing the Serbian government of committing war crimes. NATO established a permanent presence in the region shortly after 78 days of bombing, saying the move was aimed at reversing humanitarian catastrophe and keeping the peace. This presence includes Camp Bondsteel, the US Army's largest base in the Balkans. In 2004, the Kosovar Albanian government in Pristina began a campaign of ethnic cleansing against ethnic Serbs in the province while destroying Serbian historical and cultural monuments and landmarks.

Simmering tensions between Belgrade and Pristina escalated last month after Kosovo security forces entered a Serb-controlled area of the province and roughed up locals while escorting President Hashim Thachi, who claimed to have come to the area for a "friendly visit." The provocation prompted Vucic to put Serbia's military on alert. The state of alert was called off in early October.