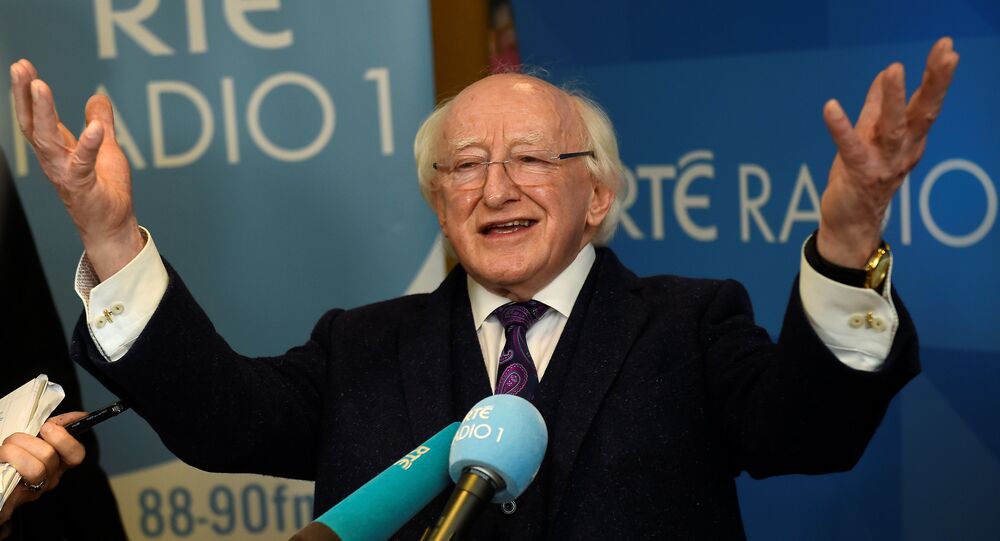 The Irish Independent newspaper said that turnout was less than 45 percent, the lowest ever recorded for a presidential election. Higgins received 55.8 percent of the vote on Friday, and the results were quickly contested by other six candidates.

© AP Photo / Peter Morrison
'Presidency in Ireland Reduced to Personality' – Professor
Voters reportedly overwhelmingly backed the removal of the so-called blasphemy offence from the Irish constitution, the latest in a series of measures that have seen the predominantly Roman Catholic country step back from religious influence in government. Exit polls and early results indicated the measure top remove was backed by over two-thirds of voters.

Local media coverage focused on a surge of support for independent businessman Peter Casey, who came in second with 23 percent of the vote, Reuters reported, citing local outlets. In particular commentators reportedly linked Casey's surge to comments he made on Irish Travelers, one of the most controversial groups in local society, who he claims do not pay a fair share of taxes and camp on other people's land.

According to the Irish constitution, Ireland's president is the head of state, but his job is largely ceremonial in the parliamentary democracy, currently led by Prime Minister Leo Varadkar.

Higgins has become the second Irish president to win two terms in a row. His inauguration will be held in Dublin Castle November 11. The re-elected president, beside his extensive political career, is also known as an academic, writer and poet.

Time for a United Ireland