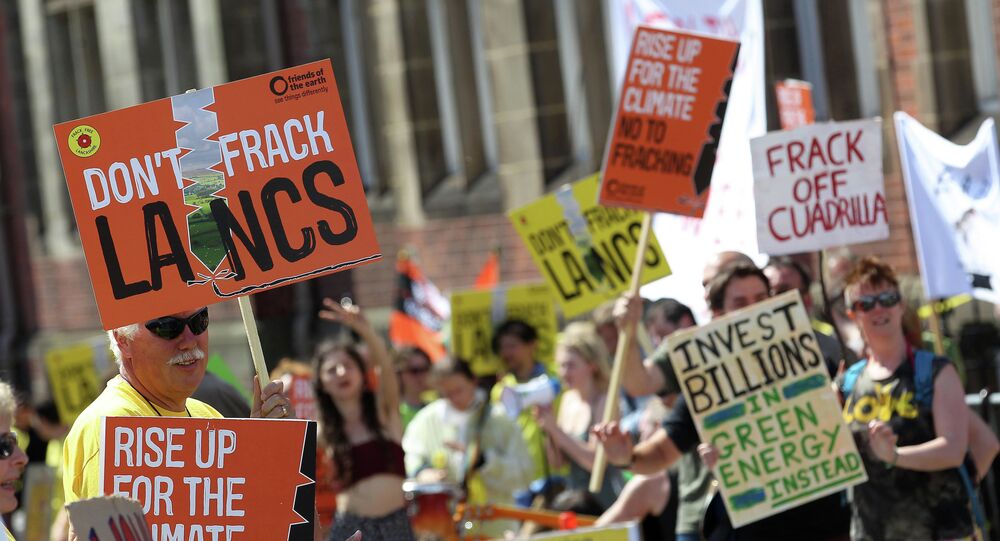 LONDON (Sputnik) – The United Kingdom should invest in the renewable energy and stop fracking operations regardless of the recent seismic event in Lancashire, Nick Danby, a spokesman for Frack Free Lancashire (FFL) group, told Sputnik on Wednesday.

On Tuesday, the fracking operations were suspended at Cuadrilla’s Preston New Road shale gas well after detection of the 0.4 magnitude seismic activity in the area.

"In my view, even if there was no seismic activity we need to be moving to renewables and not exploiting fossil fuels. The UK government, as well as most governments, signed up to the Paris treaty on climate change and as far as I'm concerned, to be doing that whilst simultaneously launching a new fossil fuel industry, is frankly incredible. There's a massive contradiction there," Danby said.

© AP Photo / Leo Correa
UK Resumes Fracking After 7-Year Ban Eyeing Energy Independence
He called on the UK authorities to develop projects in the sphere of wind and solar energy.

"At the end of the day, as you know, we're surrounded by the sea. This is one of the windiest countries in Europe. The sun does shine sometimes during summer… so we ought to be developing those industries and putting resources and subsidies towards that rather than fossil fuels," Danby said.

He also pointed out that the seismic event caused by fracking was a serious problem regardless of its magnitude.

"Any seismic event is worrying. Cuadrilla’s official line is that it was very minor and was detected by very sensitive equipment, but the point is anything that causes a seismic event is a problem to us. We predicted that this was going to happen and we're very worried it's only going to worse," Danby added.

Cuadrilla energy company suspended its fracking works in the United Kingdom in 2011, admitting that its activity was likely to have caused two earthquakes outside Blackpool. In 2014, it applied for a permit to resume fracking with the Lancashire county council, which gave its consent despite public protests.

UK Energy Giant Gives in to Pressure From US, Suspends Work on Iran Project