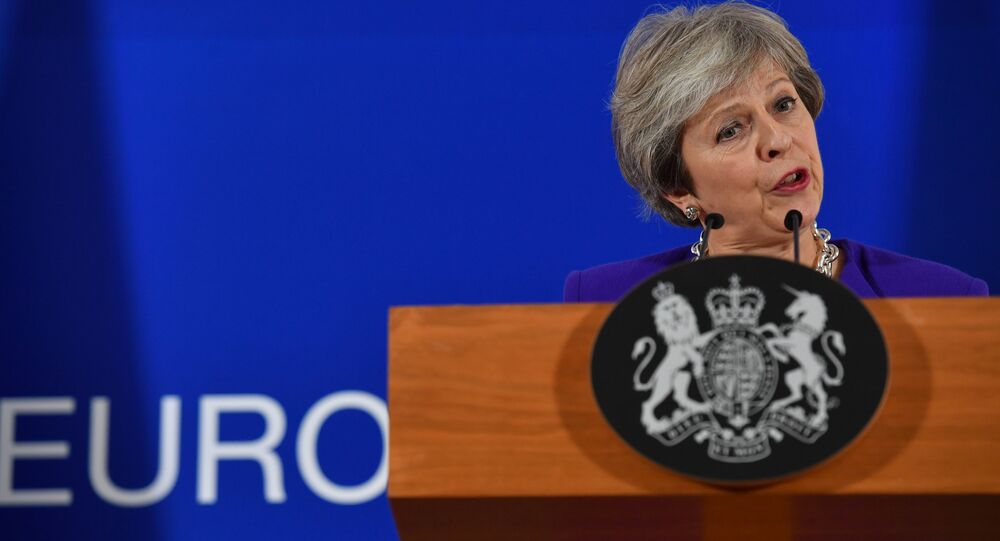 British Prime Minister Theresa May could lose her job at No. 10 as soon as next week, UK media report, citing multiple verbal attacks on her besieged Brexit plans from fellow Tory MPs.

Theresa May was told to attend a showdown at the 1922 Committee on Wednesday amid all the uncertainty hanging over her Brexit negotiations with Brussels, the Conservative Party backbenchers revealed to the Daily Mail.

"This week Theresa May will find that she is drinking in the last chance saloon and the bad news for her is that the bar is already dry," Tory MP Andrew Bridgen said, adding that the letters will "go in even faster" if she fails to turn up.

The dire warning comes as reports broke that the 1922 Committee of backbenchers, which has the power to decide on the party leadership by organizing a no confidence vote, has received 46 letters of no confidence in Theresa May, with the threshold for calling a full no confidence vote standing at 48.

READ MORE: Campaigner on UK PM May: 'She's Not a Negotiator, She’s Just Been an Appeaser'

Former Brexit Secretary David Davis, a Brexiteer who quit his post in late June in a sign of protest against Theresa May's soft Chequers plan, insisted that the PM had "managed to anger not just Leavers but ardent Remainers as well."

Additionally, MP Johnny Mercer, who called May's government a "sh*tshow" this week, said that he had received "overwhelming" messages of support from fellow Conservatives following his scathing rebuke. "I cannot continue to support an administration that cannot function," he told the Sunday Times.

However, Brexit Secretary Dominic Raab has downplayed the rumors about a possible leadership challenge, claiming that the Brexit talks are "at the end stage" and that a "good deal" with the European Union is in sight.

Earlier this week, Theresa May indicated her willingness to extend the post-Brexit transition period for a few months into 2021 on the sidelines of the European Council meeting, much to the displeasure of die-hard Brexiteers in the Tory party.

As of today, the transition period is scheduled to last for 21 months until December 31, 2020. During this time, the current EU rules are set to apply in the UK to give it more time to smooth the path for its departure from the bloc.

The European Union has recently proposed to extend the transition period beyond December 2020 over insufficient progress in talks on post-Brexit UK-EU relations, which are stalled at the moment on the issues of the Irish border and trade regulations.