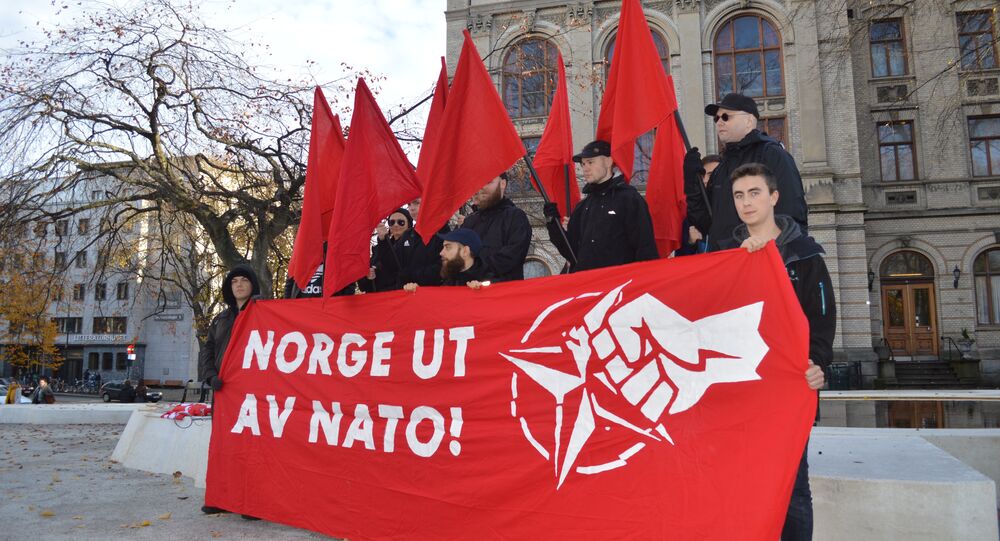 Peace activists are holding rallies in several Norwegian cities to protest against NATO's "Trident Juncture" maneuvers. Dozens of people gathered in the center of Trondheim on Saturday to voice their concerns over the nuclear arms race and further militarization of the country.

On Saturdays the streets of Trondheim are crowded, but this time it's not only because of the shoppers and those who attended the open day at Our Lady's Church. Right next to the church, a crowd with red flags and anti-war banners is singing songs about the arms race and nuclear disarmament.

The city is quite close to the Værnes military base — the facility where 330 US Marines were stationed last year despite protests from neighboring Russia.

The peace activists are certain that the upcoming "Trident Juncture 18" NATO exercise, as well as the overall militarization of European countries, poses great danger.

Protest leaders admit that it's hard to get people, especially young ones, on their side. They say that about 60 to 70 percent of Norwegians are in favor of the alliance, and partly it's because of the constant warmongering in the mainstream media.

"It's not easy to get alternative information," Professor Arnulf Kolstad told Sputnik. "There are very few pages on the Internet, a few newspapers. So, we have to go abroad to read the truth."

According to Kolstad, who's been with the Norwegian peace movement for decades now, another "domestic factor," which affects the public opinion is the influence of Jens Stoltenberg — the alliance's current secretary-general, and also a political heavyweight with national recognition:

"It was Stoltenberg who said that Putin 'will improve his power'," says Kolstad. "It's a very soft way to say it. He's not saying 'he will occupy Norway', but 'he would like to expand his country. And we have to be aware of this, and we have to increase the power of NATO'. And most people in Norway will accept this."

Such consent, according to the Norwegian peace activists, may lead to a further militarization of the country. In June, Norwegian media reported that the country's authorities would like to boost NATO troop numbers by deploying an additional 700 soldiers to Værnes and to the Setermoen military camp, which is about 400 kilometers away from the Russian border.

“It’s blood and pain, it’s John McCain, Vietnam again”: Norwegian peace activists are singing this anti-war song in Trondheim today, apparently with little respect for the “legacy” of the late US Senator.” pic.twitter.com/eJZB14QSwF

​"This escalation of weapons, of rhetoric, this demonization against Putin, against Russia, and so on, will make relations between us very bad, and we will not solve our common problems," says one of the Trondheim rally organizers, Harald Reppesgaard. "If there should be a war, we are very exposed to have the battle in this part of Europe."

Peace activists are also planning to hold rallies in other Norwegian cities. On October 27 they will gather in Bergen, Kristiansand and in the capital, Oslo.