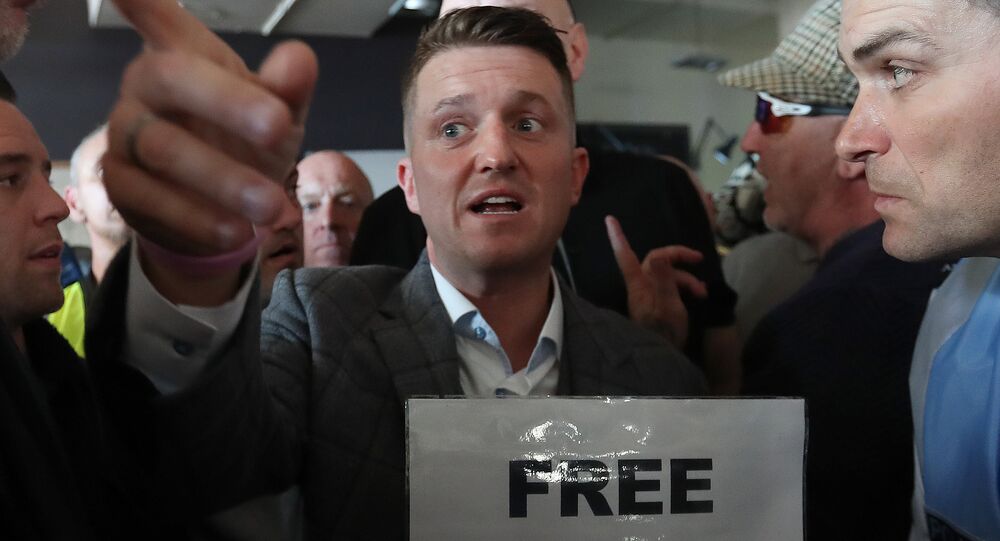 Leeds Crown Court found 20 men guilty of over 120 offenses committed against 15 under-age girls between 2004 and 2011, which included rape, abuse, pimping and forced drug use. The court also lifted the reporting restrictions on the case for which right-wing activist Tommy Robinson was charged and sentenced in May 2018.

Right wing activist and journalist Tommy Robinson went on a rant against Leeds Crown Court Judge Geoffrey Marson QC and the British media following the lifting of reporting restrictions on the case of the notorious "grooming gang," that operated between 2004 and 2011.

The activist published a video on his Facebook page, where he slams the judge's earlier decision to let the suspects go on bail, which led to one of them, later convicted to 17 years in prison, escaping to Pakistan. He noted that when he was accused of reporting on the "grooming gang" case in May, the very same judge never gave him bail, which he had given to the people who "lived the life of crime."

"One of these sick child rapists is on the run in Pakistan because he was given bail. No bail for me though, they took me off the street and put me in prison inside five hours but 10 mass child rapists where 15 children gave witness statements spend a year walking the streets with your children because the establishment thought they posed no risk," he wrote on Facebook.

Robinson further steamrolled the media, which, in his opinion, challenged the reporting restrictions on the case too late. The activist said that it should have happened, when he was jailed for leaking a transcript from the courtroom hearing on the case. He also noted that only now the British media had started reporting the fact that "90%" of the gang's members were of Pakistani descent, while Robinson had been saying the same for years.

On October 19 Leeds Crown Court found some 20 men guilty of organizing a "campaign of rape and abuse" in several UK cities involving underage girls between 2004 and 2011. The gang's ringleader, Amere Singh Dhaliwal, 35, was found guilty of 54 counts, including 22 counts of rape, and jailed for life with a minimum of 18 years.

READ MORE: Tommy Robinson on UK Establishment: They Want to Make Me a Pariah

Other members received sentences between 5 and 18 years. They were involved in numerous cases of rape, abuse, human and drug trafficking, organizing prostitution, child abduction, and inciting children to engage in sexual activity. At the same time, the court admitted, that some perpetrators, involved in the case, remained unidentified, despite the testimonies of 15 girls that were abused by the gang.