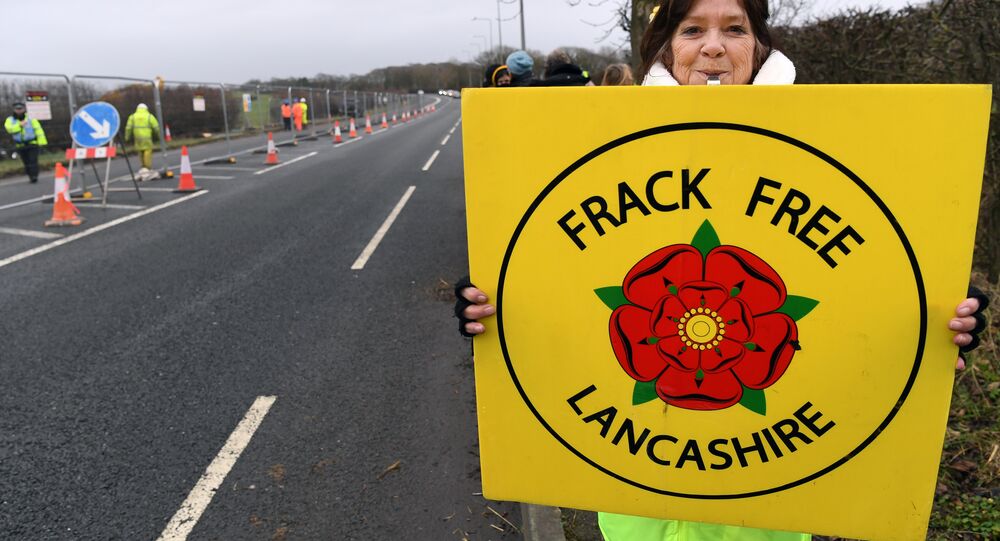 Three protesters controversially jailed in September for blocking access to a fracking site have had their custodial sentences quashed by the court of appeal - and the Judge who jailed them could face censure.

In his closing remarks, Lord Chief Justice Ian Burnett said the court concluded "an immediate custodial sentence in the case of these defendants was manifestly excessive".

"In our judgment the appropriate sentence was a community order with a requirement of unpaid work. But these appellants have been in custody now for two weeks, the equivalent of a six-week prison sentence. As a result, we've concluded the only appropriate sentence is a conditional discharge," he explained.

When the court's decision was announced, the packed courtroom erupted with applause and some supporters began singing.

The activists — Simon Blevins, 26, Richard Roberts, 36, and Rich Loizou, 31 — were jailed for a total of 47 months after a four-week trial for causing a public nuisance at Cuadrilla's Preston New Road site in Lancashire.

© AFP 2021 / PAUL ELLIS
Thousands to Protest Against Fracking in UK City of York on July 30
The three climbed onto lorries outside Cuadrilla's fracking site in Preston in a protest July 2017, which lasted almost 100 hours. The trio were the first environmental protesters to be imprisoned in the UK since 1932 — Judge Robert Altham said they were not suitable for suspended sentences because they "provided a risk of re-offending".

A fourth activist, Julian Brock, 47, was sentenced to 12 months in custody, suspended for 18 months, after admitting public nuisance over the same protest. Brock did not challenge his sentence.

In a statement passed to Sputnik, Kevin Blowe, Coordinator at the Network for Police Monitoring, welcomed the news.

"The convictions were clearly intended to send a warning to others and are therefore a part of the continued efforts to close down space for campaigners to meaningfully resist fracking. We have been highlighting for some time now the 'chilling effect' attempts to frighten people away from taking part in protests are having on the right to freedom of assembly. This week, police in Lancashire again arrested protesters at the fracking site at Preston New Road for "public nuisance", although these charges were subsequently dropped. If senior officers thought they'd discovered a strategy to try to deter anti-fracking campaigners, using charges backed up with the threat of potential imprisonment, it now seems in tatters," he said.

The trio's jailing provoked outcry, with campaigners, rights groups and lawmakers slamming their sentences as disproportionate. An appeal was organized almost immediately, backed by campaign groups Friends of the Earth and Liberty — over 2,000 academics signed an open letter calling for a review of the sentences, and an online petition was signed by over 28,600.

The controversy escalated even further, however, when it was revealed Judge Altham had close ties to the energy industry — his father's firm JC Altham and Sons supplies offshore gas and oil platforms, while his sister Jane Watson, managing director of the firm, signed an open letter to Lancashire County Council promoting fracking. It's been revealed the letter organized by the North West Energy Task Force, which is funded by Centrica and Cuadrilla Resources.

© AFP 2021 / Leon Neal
Activists attend an anti-fracking rally outside the Houses of Parliament in central London on January 26, 2015, calling for MPs to vote for a moratorium on fracking within the UK.
The code states, "where a close member of a judge's family is politically active, the judge needs to bear in mind the possibility that, in some proceedings, political activity might raise concerns about the judge's own impartiality and detachment from the political process."

Speaking to the mainstream media, Marsden said it was "in the public interest" to determine "as soon as possible" whether Altham had adhered to judicial principles.

"The controversy regarding the severity of sentencing makes this particularly important in such a highly sensitive and charged situation as fracking," he explained.

The ruling will surely provide some comfort to anti-frackers, who have frequently been subject to heavy-handed tactics by police officers at protests, despite the typically non-violent nature of their activities.

There are numerous examples of anti-fracking protesters being arrested arbitrarily and even unlawfully, taken into custody on charges such as 'walking with intent', and assaulted without provocation, such as the forcible removal of a 79-year-old from one protest site for distributing tea to attendees.

BREAKING: @LancsPolice confiscate walking stick from disabled woman then forcefully & unnecessarily push her to the ground at #PNR #Fracking site.

Previously they had broken her shoulder.

Again it appears the police are targeting vulnerable people to discourage dissent.

​Moreover, the designation by authorities of anti-frackers as ‘domestic extremists' under the controversial counter-terrorism Prevent strategy meant they've been subject to enhanced police surveillance, monitoring and intelligence gathering. While the label has no basis in law, a 'working definition' of the term was crafted by police in 2014 — "activity of groups or individuals who commit or plan serious criminal activity motivated by a political or ideological viewpoint."

In December 2016 the Home Office claimed opposition to fracking was no longer classified as 'domestic extremism', SpinWatch research indicates at least seven of the 11 regional counter terrorism and counter terrorism intelligence units comprising the UK's National Counter Terrorism Policing Network continue to treat it as such.

Police Scotland, for example, has been "closely monitoring" communities in Scotland — where fracking is currently banned — while Special Branch officers in the Midlands have provided "significant intelligence support" to facilitate policing of anti-fracking demonstrations.