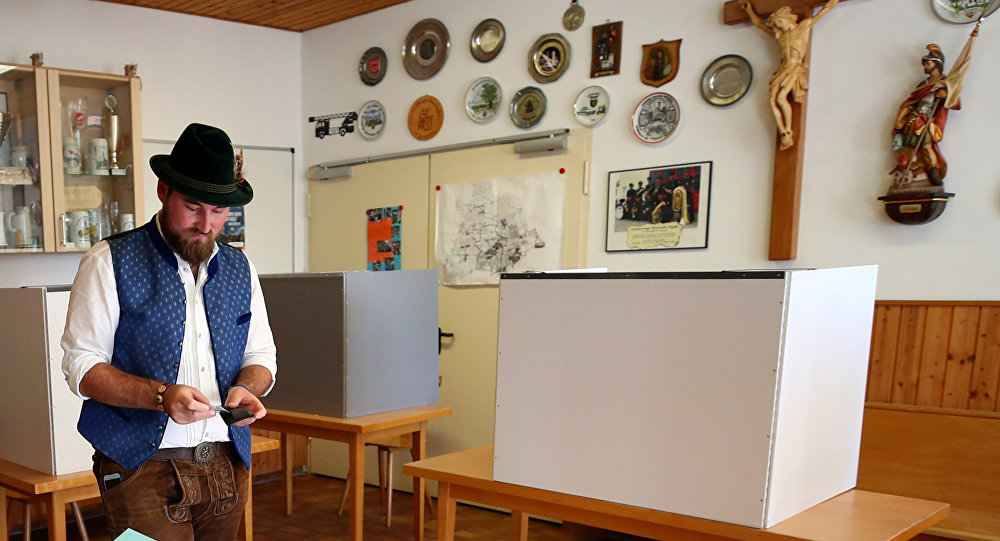 While the Greens and anti-immigrant Alternative for Germany party are celebrating their breakthrough in the Bavarian regional election, the conservative sister party of Angela Merkel’s CDU and the Social Democrats are reflecting on their poor performance, which some interpret as an omen for Germany's governing parties and the Chancellor herself.

Although the Christian Social Union (CSU), the Bavarian sister party of the Christian Democrats, has managed to secure the largest proportion of the vote in the German state's parliamentary election, it sees little cause for celebration. With a preliminary tally indicating that it secured 37.3% of the vote (10% less than in 2013), the CSU, led by German Interior Minister Horst Seehofer, has scored its worst result in 50 years.

After dominating the Bavarian parliament for decades, the CSU might get 85 out of the Landtag's 205 seats and lose its ultimate authority in the region, as well as the ability to independently form a coalition.

This prompted Bavaria's Minister-President Markus Soeder to brand the results “painful” and promise to take them with “humility.” However, according to German Radio, he didn’t think that Bavarian state policy is the reason for this outcome.

"Of course it is clear, and you can feel this from the election results of other parties, that the main challenge of recent years was a discussion, also led in Berlin. You see a certain federal trend. And this is not so easy to disconnect from this nationwide tendency," he said.

Horst Seehofer, who faced criticism within the government and the Union (as the CDU/CSU coalition is colloquially known) as well as in his home region Bavaria for his tough stance on migration policy, has been cautious about commenting on what prompted such a result.

"In coming weeks, it will also be important for us to work out what this result exactly means. As always, we will handle the situation with the utmost care, and then draw the necessary conclusions," he told German Radio.

The leadership of Angela Merkel’s CDU hasn’t suppressed its disappointment, either. CDU General Secretary Annegret Kramp-Karrenbauer described the result as no less than "bitter," although she urged others to restrain from debates about it at the federal level. According to her, the CDU will now concentrate on another regional election, scheduled to take place in Hessen in two weeks.

The Social Democrats (SPD), who have lost 10 points in comparison to the 2013 vote, attracting only 9.7 percent in Bavaria, also blamed its problems on federal-level politics. Party leader Andrea Nahles, who promised to analyze the result "on all levels,” also stated that the  performance of the CDU/SPD grand coalition was one of the reasons for their party’s crash.

"We didn’t perform as SPD altogether… [SPD] hasn’t been able to detach itself from this directional dispute between the CDU and CSU," Nahles said to the German Broadcaster ARD, adding that it was “clear that something has to change."

SPD General Secretary Lars Klingbeil, who also described this outcome as a "bitter defeat,” told ZDF that the election in Bavaria was also a "clear signal" to the grand coalition in Berlin.

SPD Vice-Chair Ralf Stegner has taken it even further, threatening to torpedo Germany’s governing grand coalition. He stated in an interview with the broadcaster n-TV that there’s a revision clause in the SPD/ CDU/CSU coalition agreement.

“Yesterday’s warning signal from Bavaria can’t be ignored. We can’t just sit and watch the decline…and in the end…the right wing would profit, this can’t happen. If no serious changes happen in Berlin, the governing coalition won’t live,” he told the broadcaster.

Left-wing party Die Linke's leader in the Bundestag, Sahra Wagenknecht, has been more categorical and predicted a grim political future for the ruling parties, stating that "The Bavarian election will trigger an earthquake in Berlin."

Hopes up Among Conservatives and Greens

The Social Democrats have been outplayed by two rival parties with similar platforms — the conservative regional party Free Voters, who are rooting for a restrictive asylum policy and attracted 11.6 percent of the vote, and the right-wing anti-migrant Alternative for Germany (AfD) party, which attracted 10.2 percent.

However, these parties were still bypassed by the Greens. For them, the outcome of the election in Bavaria was a historic success; they scored 17.5%, taking second place with their left-leaning agenda.

“I am very pleased that the issues that we have brought forward, namely protection of natural resources, equal rights and opportunities for women, a pro-European policy, and a pro-democracy policy, are shared by so many people," Green candidate Katharina Schulze stated.