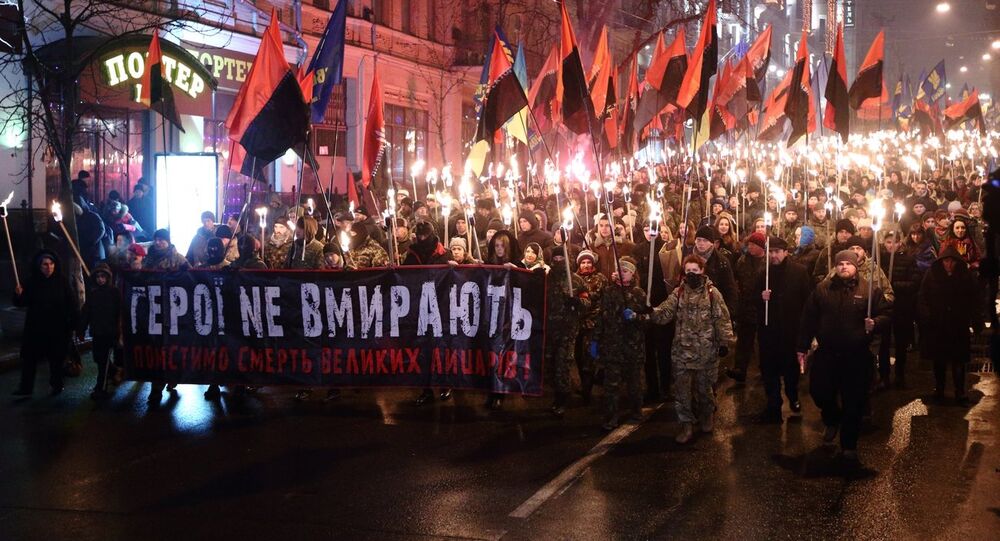 MOSCOW (Sputnik) - Some 15,000 people marched through Kiev on Sunday to mark the anniversary of a right-wing Ukrainian paramilitary that fought against Soviet troops in World War II.

"The march… was peaceful. Some 15,000 people took part in the procession," National Police chief Andriy Krychtchenko said in a statement. The Ukrainian Insurgent Army has been accused of massacring tens of thousands of Poles in Nazi-occupied Poland. It marked 76 years since its creation on Sunday.

Moscow has repeatedly expressed concern over a surge of neo-Nazi movements and policies which glorify Nazi collaborators in Ukraine, Poland and the Baltic states.

Marches in memory of deceased members of the Latvian Legion of the Waffen SS in Riga and of Stepan Bandera, the leader of the Ukrainian nationalist movement and the Ukrainian Insurgent Army, which collaborated with Nazi Germany during World War II and was responsible for numerous atrocities against civilians, have become a cause for harsh criticism by a number of international anti-fascist organizations as well as governments worldwide.

Ukraine’s President Petro Poroshenko on Thursday signed a bill that will formalize the use of a salute once popular with a controversial nationalist group by the armed forces. The new rules, which will see the military abandon the word "comrade" as the formal address in favor of a less widespread "pan," will also be enforced in the national police.