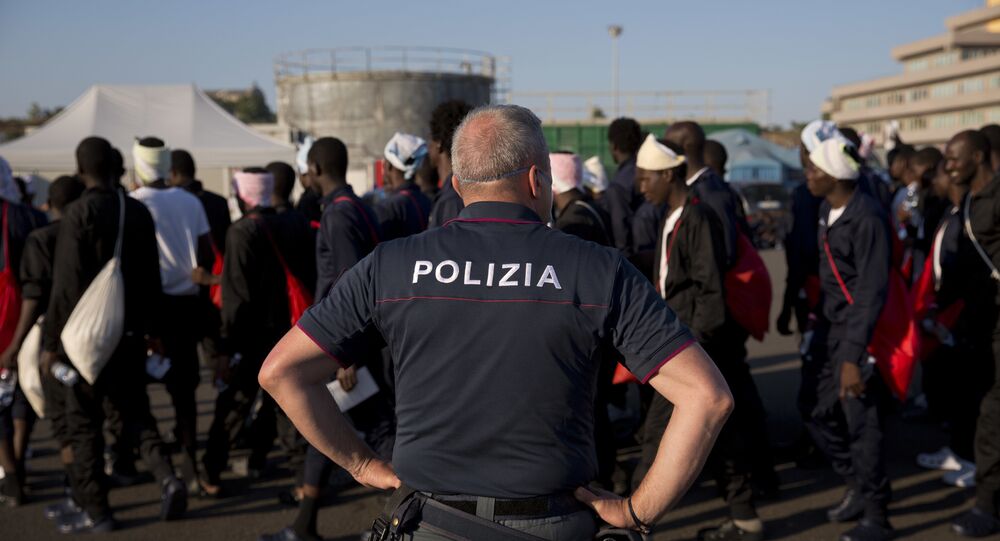 The city’s mayor has been arrested for arranging marriages of convenience to dodge Italy’s immigration laws, among other charges.

The Italian city of Riace, known for its policy of welcoming migrants as a form of social experiment on migrant integration in order to fight depopulation, must now transfer all its migrants away, according to Italy's Interior Ministry.

The Ministry says the relocation of migrants to refugee centers should begin next week, BBC reports.

The announcement comes days after the town's mayor, Dominico Lucano, has been arrested over charges of aiding illegal migration. In particular, he is accused of organizing "marriages of convenience" between local citizens and illegal migrants to circumvent Italy's migration restrictions, among other things.

© AP Photo / Emilio Morenatti
Italian Mayor Arrested for Allegedly Aiding Illegal Migration - Finance Police
As Sputnik reported earlier, the investigation against Lucano was launched last year after the prefecture of Reggio Calabria city had sent a commission to Riace, which allegedly detected the misuse of public funds dedicated to the allocation of migrants.

He is also charged with allocating waste disposal contracts to two companies without a required public tender process.

Lucano turned Riace in a migrant-accepting city in an attempt to fight depopulation. According to the German newspaper Zeit, Lucano accepted people from Afghanistan, Eritrea and Iraq and quartered them in vacant houses. The population of Riace is now about approximately 1,800 people.

Following his arrest, the Interior Minister of Italy Matteo Salvini of the Lega Party welcomed Lucano's arrest and criticized the "do-gooders," who "want to stuff Italy with immigrants."

Lucano says his lawyers prepare to appeal against his detention, claiming the government wants to "destroy" him.

"How is it possible to think of destroying the 'Riace model', which has been described by innumerable people, politicians, intellectuals and artists, as an extraordinary experience?", he is quoted as saying by AFP.

Italy Expelled Over 100 Extremists Since 2018 - Ministry

Italy's Flight From Eurozone Would Be Liberation, Not Punishment – Eurexit Chief

Italy Turning to Beijing as EU Pushes Back on Chinese Investments