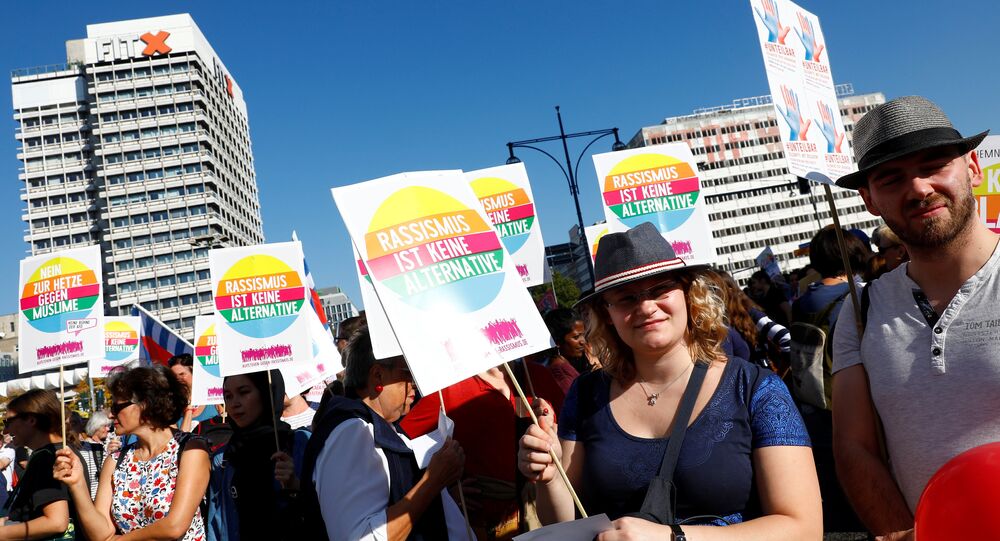 MOSCOW (Sputnik) - Between 150,000 and 242,000 people rallied in Berlin on Saturday against racism and discrimination, local media reported.

Crowds gathered in downtown Alexanderplatz square, according to Die Zeit newspaper. They carried balloons and signs that read "Refugees Welcome" and "Racism is No Alternative."

Estimates of over 150,000 people at #unteilbar anti-racist demo in Berlin. Loud, colourful and diverse. pic.twitter.com/ZBoSTY2weo

© AP Photo / Jens Meyer
Hitler Salute Wolves Displayed in Chemnitz Amid Right-Wing Resurgence
The event was organized by more than 450 local and national organizations. Its motto was "Solidarity Instead of Division – for an open and free society."

"The majority in our country is diverse and open – we are for solidarity and against division! When haters try to divide us we move closer together. Great!" Foreign Minister Heiko Maas tweeted.

Rival rallies on immigration were held across the country in summer after a German was killed in a brawl with foreigners, prompting far-right protests against Chancellor Angela Merkel’s 2015 decision to let in a million of migrants, many of them from Syria and North Africa.

Wow! So proud of #Berlin today, incl. family & many friends, who came out in force against racism! #Unteilbar pic.twitter.com/FdhkP8cPqM

​Europe has faced a significant influx of migrants in the last few years, with many fleeing their home countries hoping to find a better life in the European Union.

According to organizers 150.000 people at #unteilbar in Berlin. Protesting against hatred and racism. 40.000 were expected. pic.twitter.com/WDhj3pXCYm

EU member states have been challenged by differences of opinion over the issue of migration, while in Germany these differences have manifested themselves most distinctively, resulting in internal divisions. German Interior Minister Horst Seehofer, who leads one of the ruling coalition parties, has been urging for a stricter immigration and border policy.