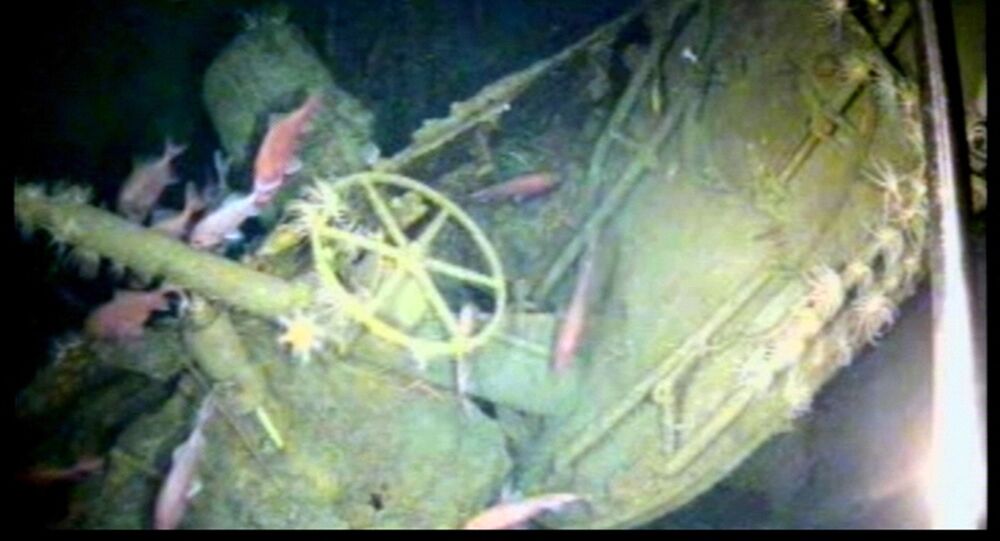 More than 60 years after being torpedoed by the British navy, a Nazi submarine continues to spread fear off the coast of Norway

The blast-torn wreck of a WWII German submarine resting on the bottom of the Norwegian Sea about two miles off Bergen has been leaking dangerous mercury into the sea from 1,800 rusted containers.

A Dutch firm has been commissioned by the Norwegian government to bury a sunken Nazi U-boat in sand to stop toxic chemicals from leaking into the sea, The Daily Mail wrote.

© Photo : Youtube/ Berliner Zeitung
Sunken Nazi U-581 Sub Discovered Near Portuguese Azores
Around four kilograms of the toxic metal a year oozes into the water from the 2,400-ton wreck resting 500 feet below the surface, resulting in high levels of contamination in fish and causing boating and fishing in the area to be banned.

As a result, a Dutch company has been hired to bury the wreck under 40 feet of rubble to stem the leakage.

The operation is scheduled for next year and will take a year to complete.

A large counter fill dug last year at the foot of the unstable slope will enable 100,000 tons of sand to be moved over the vessel.

A similar process of entombing the U-boat has been successfully used around 30 times in the past to contain mercury-contaminated sites over the last 20 years, researchers say.

Specialists still fear that despite these measures more than 60 tons of mercury could still leak out from the vessel for decades to come to become an “underwater Chernobyl.”

The U-864 was torpedoed by a British submarine in early 1945 as it was sailing to Japan.

Alerted by code-breakers at the Bletchley Park decoding center north of London, who had intercepted a German message related to the sub’s mission, a British submarine zeroed in on the U-864 and, firing four torpedoes, sank it.