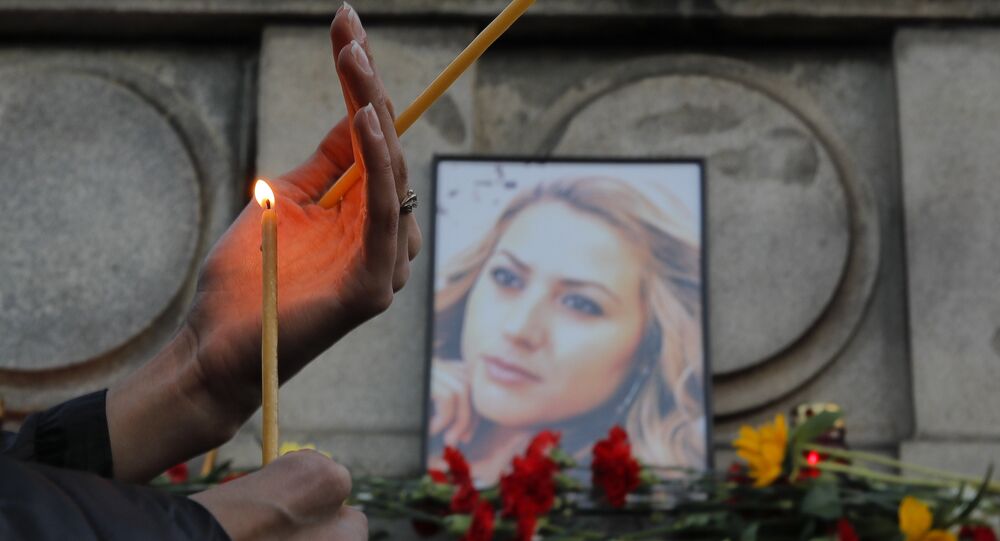 A government source told Reuters that the Bulgarian police had detained a suspect over the possible killing of journalist Viktoria Marinova.

The suspect is considered to be a Romanian national, who also has a Moldovan citizenship, according to the Bulgarian National Radio.

The media outlet noted that the Interior Ministry had so far declined to comment on any information related to the case.

© AP Photo / Emrah Gurel
Saudi Consulate in Istanbul to Be Searched After Journalist Disappears - Ankara
Earlier in the day, the BTA news agency reported that Bulgarian authorities were considering all possible versions of the assassination of Bulgarian journalist Viktoria Marinova and consider her murder an "extremely cruel" act.

According to the agency, the country's prosecutor general, Sotir Tsatsarov, and Interior Minister Mladen Marinov said they were considering all versions of the murder, from "an accidental attack of a mentally ill person with a strong sexual desire to a planned attack with a personal motive."

The officials said that the best experts of the Interior Ministry were engaged in the investigation. Both officials called the murder of Marinova an "extremely cruel" act.

The publication added that the staff of the Institute of Psychology was preparing a psychological portrait of the attacker. The investigators also study the personal and professional life of the victim.

© AP Photo / Halit Onur Sandal
Turkish Police Believe Disappeared Saudi Journalist Killed - Reports
Prime Minister Boyko Borissov noted that the detection of criminals was a matter of time and that the best criminal investigators were sent to the city of Ruse to work on the case.

Administrative director and host of the regional broadcaster TVN, 30-year-old Viktoria Marinova, was raped and killed on Saturday in the city of Ruse in northern Bulgaria. The law enforcement agencies believe that the murder may be related to the investigative work of the journalist. The last issue Marinova worked on was the so-called GPGate — a scandal surrounding the theft of money from EU funds.

Land of the Free: MAGA Hat Gets US Journalist Fired on the Spot