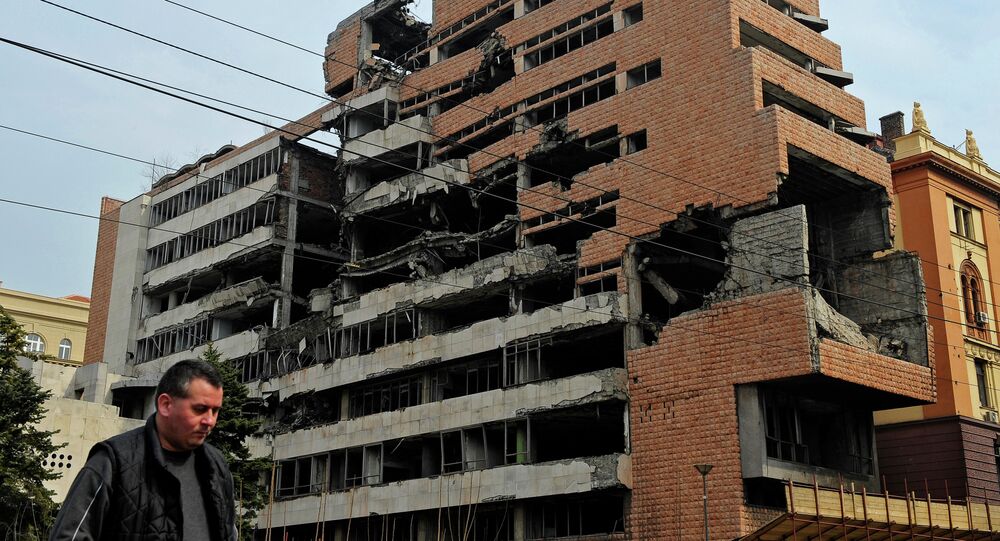 NATO carried out a 78-day campaign of airstrikes against Yugoslavia in 1999 after accusing Belgrade of committing war crimes in Kosovo. The strikes left as many as 5,700 civilians dead, and contaminated part of the region with depleted uranium, leading to a spike in juvenile cancer rates.

Speaking to students at the University of Belgrade as part of his three-day tour of Serbia on Sunday, NATO Secretary General Jens Stoltenberg explained that the bombing of Yugoslavia was not aimed against ordinary Serbs, but against President Slobodan Milosevic.

"We are aware in NATO that many people in Serbia still have bad memories about the bombing, the airstrikes in 1999," Stoltenberg said, speaking to Serbia's RTS television channel. "I stress that we did this to protect civilians and stop the Milosevic regime," he added.

Two decades after the bombing, Stoltenberg called on Serbians to "look to the future," and pointed to what he said was an "excellent relationship" between the military bloc and Belgrade.

© AP Photo / Dimitri Messinis
Serbian President Slams NATO Yugoslavia Bombing as More Kids Get Cancer
"We need dialogue to solve the differences and to find political solutions," the official said, referring to the conflict between Belgrade and its breakaway region of Kosovo, which unilaterally declared independence in 2008.

"NATO supports [dialogue], not only politically, but also because we are present in Kosovo in the form of the KFOR," Stoltenberg stressed, referring to the NATO-led force deployed in Kosovo, which includes Camp Bondsteel, the largest US base in the Balkans.

Thank you, #Serbia & @avucic, for hosting the largest disaster response exercise organised by #NATO’s Euro-Atlantic Disaster Reponse Coordination Centre. 2,000 personnel from almost 40 countries, working together to save lives. This shows our partnership is getting stronger. pic.twitter.com/Favx52sqtC

In 1999, an armed confrontation between Muslim Albanian separatists from the Kosovo Liberation Army paramilitary force and the Serbian army and police in Kosovo led to the bombing of Yugoslavia by NATO forces. US Secretary of State Madeleine Albright justified the strikes by accusing the Serbian government of committing war crimes.

After the bombing, NATO deployed to the region, saying the move was aimed at reversing the humanitarian catastrophe and keeping the peace. In 2004, Kosovar Albanians began a campaign of ethnic cleansing against Christian Serbs in the province, and instigated the destruction of Serbian historical and cultural monuments and landmarks. In 2008, Kosovo unilaterally declared independence from Serbia, with Belgrade, Russia, and many other countries refusing to recognize the breakaway republic.

© Sputnik / Iliya Pitalev
Belgrade-Pristina Tensions Remain High After Lake Gazivoda Situation - Serbian Politicians
Simmering tensions between Serbia and Kosovo briefly escalated again late last month after Kosovo security forces entered a Serb-controlled area of the province unannounced and roughed up locals while escorting President Hashim Thaci, who claimed to have come to the area on a "friendly visit." The provocation prompted Serbian President Aleksandar Vucic to put the military on high alert, and to ask for Russia's support in addressing the issue. The state of alert was called off on Thursday.
...
Reddit
Google+
Blogger
Pinterest
StumbleUpon
Telegram
WhatsApp
483