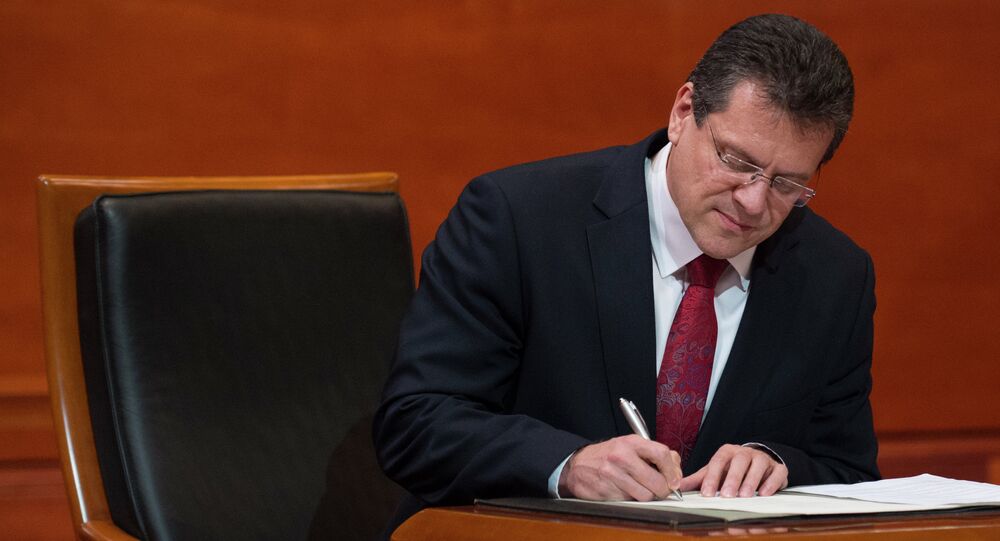 BRUSSELS (Sputnik) - European Commission's Vice-President for Energy Union Maros Sefcovic said on Thursday that he was going to call on his Russian and Ukrainian colleagues soon to convene a new trilateral ministerial-level meeting between the European Commission, Russia and Ukraine.

Sefcovic said that experts from the three sides had held several meetings in September, during which they had discussed all the priorities set during the latest ministerial-level meeting in July.

© CC0
Ukraine's Economy May Lose Up to 3% GDP Due to Nord Stream 2 - Finance Ministry
According to Sefcovic, as the results of the September meetings are currently being assessed, he is going to address his Russian and Ukrainian colleagues in near future, and invite them to promptly organize ministerial level negotiations.

In late September, a representative of the Ukrainian Naftogaz energy company said that the ministerial level meeting was expected to be held in October.

As the current contract for the transit of Russian gas to Europe through Ukraine expires in late 2019, Ukraine has repeatedly voiced its willingness to continue remaining a transit country, as well as its concern over the Nord Stream-2 pipeline project, envisaging the annual delivery of 55 billion cubic meters of Russian natural gas to the European Union, with the pipeline bypassing Ukraine. Russian President Vladimir Putin said in May that Russia would not halt the transit of gas through Ukraine if this remained cost-effective.