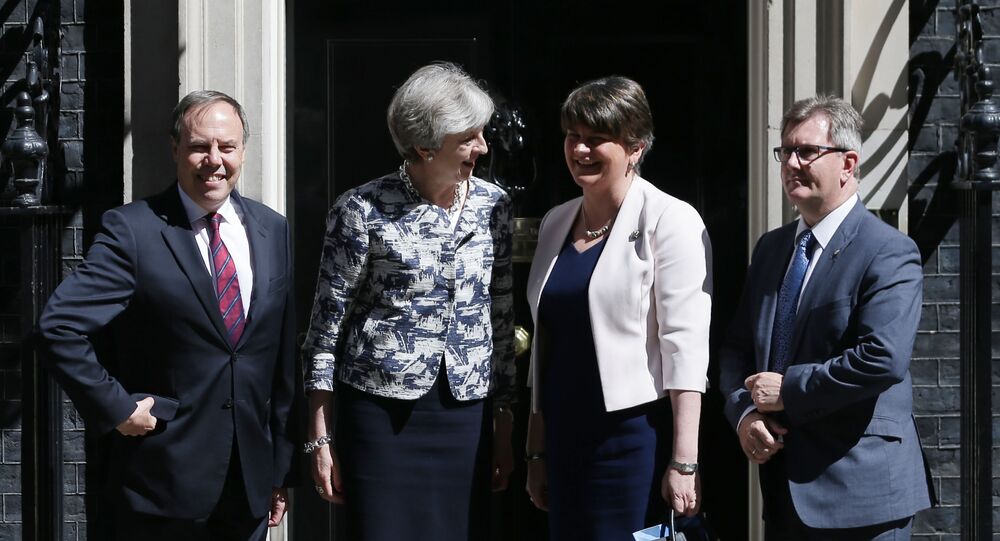 With the Tories failing to secure a majority in the House of Commons in the 2017 snap general election, Theresa May struck a controversial deal with the DUP to pass legislation through parliament.

Northern Ireland’s Democratic Unionist Party (DUP) has warned UK Prime Minister Theresa May they will vote down her Brexit deal in parliament if it will result in the creation of a “border of any kind."

Vowing to vote alongside Labour MPs against May if the DUP’s “red lines” are breached, Deputy Leader Nigel Dodds said, "Let us be clear that for the DUP there will be no border of any kind down the Irish Sea — customs, regulatory, political, constitutional or otherwise because we are part of the UK and we will leave the EU together and as one nation.”

Moreover, outlining the “danger” of the Irish backstop, Dodds claimed it would not only isolate Northern Ireland from the rest of the UK but could “shackle” Britain to the EU long after Brexit.

© REUTERS / Angela Weiss
UK PM May Reveals Some Details of Planned Post-Brexit Immigration System
Meanwhile, DUP Leader Arlene Foster insisted her party will not allow the EU to break up the UK, saying, “We have to ensure that there is no border down the Irish Sea.”

The Tories struck a deal with the DUP after the 2017 general election, transferring billions of pounds to Northern Ireland to win the party’s vital support to gain a majority in the House of Commons.

To further complicate the matter, as Brexit negotiations falter, the prospect of a leadership challenge against May is growing, with a Tory MP filing a letter to the 1922 Committee calling for her resignation.