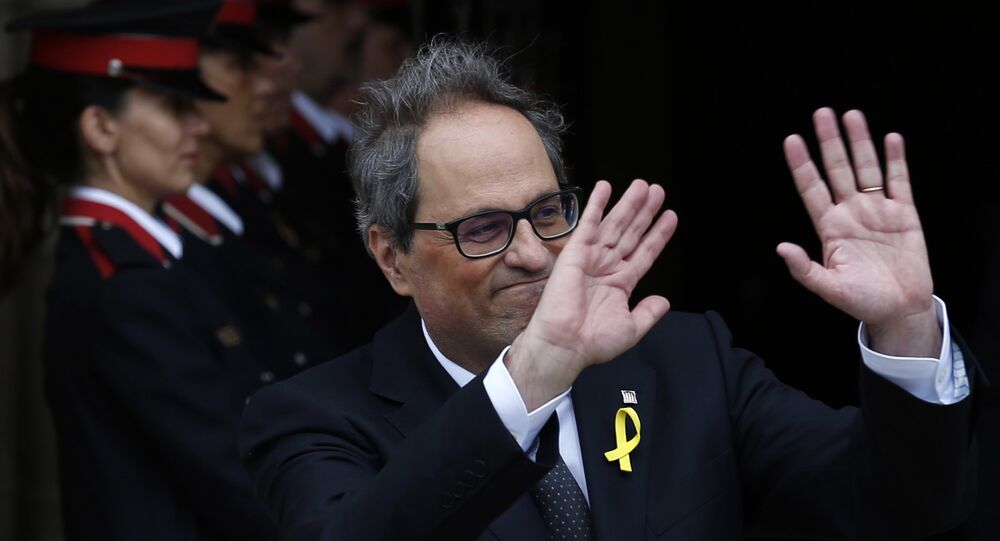 "Our patience has its limits… If there is no agreement [on Catalonia's independence] by November, the independence movement cannot guarantee Mr Pedro Sanchez stability in the Congress of Deputies [the Spanish parliament's lower chamber]… We will not provide any kind of support to Sanchez if there are no proposals on self-determination," Torra said, adding that he had sent a letter to the prime minister.

READ MORE: There Are No Answers to Political Situation in Catalonia — Professor

Torra also condemned Monday's riots that took place across the Catalan region to mark the first anniversary of the region's independence referendum and said that violence occurred in isolated incidents.

© REUTERS / Jon Nazca
Pro-Independence Demonstrators in Catalonia Block Roads, Railway Line (PHOTOS)
The support of small nationalist parties has been crucial for the ruling Spanish Socialist Workers' Party, led by the prime minister, because it currently has only 84 seats in the parliament out of 350, while the left-wing alliance has 67 seats.

If Sanchez loses the support he enjoys on the part of Catalonia, it may lead to early parliamentary election, which are currently scheduled for 2020.

On October 1, 2017, the Catalan autonomous region voted at a referendum to secede from Spain. The regional government later proclaimed Catalonia's independence, but the Spanish government refused to accept the outcome of the vote and dissolved the Catalan parliament as a result, establishing direct rule over the region.