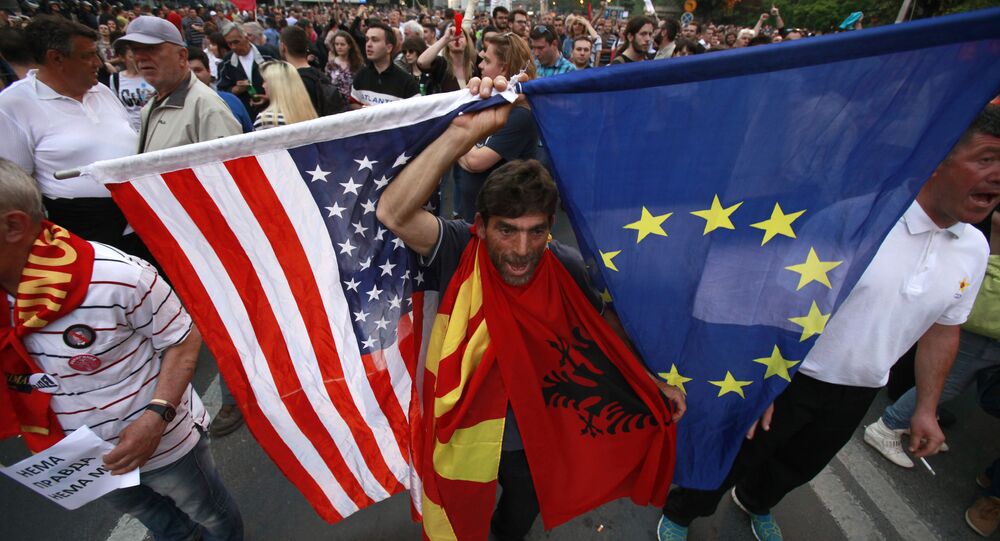 BRUSSELS (Sputnik) - While Macedonia has yet to reach a consensus on whether to approve the new name agreed with Greece, the government has claimed victory after an overwhelming majority backed the change in a low-turnout non-binding referendum.

© REUTERS / Marko Djurica
Macedonian Opposition Party Claims Victory in Name Change Vote Citing Low Turnout
The Macedonian Parliament has already endorsed the deal twice, in June and in July, but President Gjorge Ivanov has refused to sign it. Prime Minister Zoran Zaev needs two-thirds of the parliament to back the name change. The prime minister's Social Democratic Union of Macedonia (SDSM) alone does not have the required majority in a 120-seat parliament. It holds roughly the same number of seats as Internal Macedonian Revolutionary Organization – Democratic Party for Macedonian National Unity (VMRO-DPMNE), the main opposition party,

© AP Photo / Boris Grdanoski
Macedonian People Protested Decision Imposed From Outside at Referendum – Envoy
The very wording of the referendum questions was "a disgrace," as it focused on "joining the EU and NATO" rather than simply a name change, Professor of Political Economy at Department of Economics in the University of Macedonia Stavros Mavroudeas told Sputnik.

Macedonian People Protested Decision Imposed From Outside at Referendum – Envoy